Happy Father’s Day to all the awesome dads out there to both human and critter alike! I want to say thank you to my dad. A man who showed so much patience and love even when I was hopped up on sugar and bouncing off the walls like a wild mongoose. This was a regular occurrence since I have always had a love of sweets and very little self control. A HUGE thank you to a man who was strong for me even when I pushed him to the limits. Like the time I was riding my bike and hit the curb sending me flying over the handlebars, head first into a huge bolt that was sticking out of the wall. He didn’t crack one bit when I went running up to him crying with blood pouring out of my head, looking like Stephen King’s Carrie. There was a lot of blood pouring out of me..SQUIRT SQUIRT GUSH GUSH!! I looked like an All You Can Eat Buffet for vampires. I wasn’t scared that day because he made me feel like everything was going to be okay. SQUIRT GUSH!! No matter how hard things got as I grew up, he always made me feel like that. Thanks Dad!! And yes, that head injury explains a lot about me today. 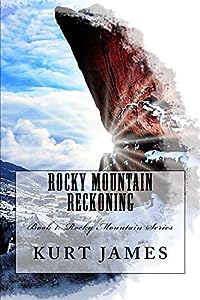 Lucas Eldridge is a loving and generous man and while away from home from his ranch in Morrison, Colorado two Mexican bandits Juan and Jose Verdugo savagely murdered his wife Belle.

What the Verdugo brothers did not count on is that Lucas Eldridge is a dangerous man that is not to be trifled with. For over two years Lucas is a man driven to exact justice and revenge from the bandit brothers that took everything he ever wanted and everything he ever loved when his wife died at their hands.

In a pursuit through the Colorado Rocky Mountain wilderness that cover towns such as Breckenridge, Como, and Silver Plume and across the “Great Divide” Lucas sole purpose for living is to take the life from the Verdugos and condemn them to the depths of Hell.

Lucas has become a hard and haunted man until he rescues the beautiful redheaded, green eyed Devon King the sister of a surveyor working for the Denver, South Park and Pacific Railroad from Jose the youngest of the Verdugo brothers on top of Boreas Pass.

Devon King is everything that Lucas departed wife was and his heart knows it, but his hatred for the Verdugos leaves no room for love. Or does it?

Follow Lucas Eldridge in his western adventure as he battles the Verdugos and other outlaw’s, mountain lions, wolves and the deadly cold and snow of a Colorado winter in the high country of the Rocky Mountains in his quest for justice and finally love. 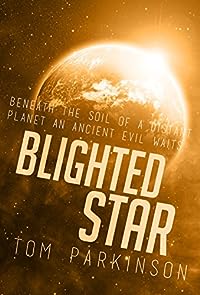 Beneath the soil of a distant planet an ancient evil waits… 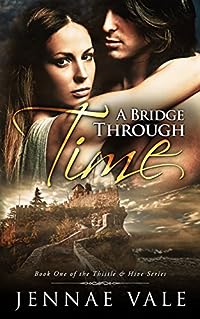 A Bridge Through Time: Book 1 of The Thistle & Hive Series
by Jennae Vale

A Bridge Through TimeBook 1 of The Thistle & Hive SeriesAshley Moore’s life in San Francisco has hit a few snags, not the least of which involves sightings of a mystery man around every corner. Is she losing her mind or does he really exist? Her search for this grey-eyed stranger leads her to Scotland. There she meets a witch with a secret, a vindictive English knight who is bent on revenge, and she crosses a fog-shrouded bridge into the arms of a 16th century Highlander.

Cailin MacBayne is no stranger to beautiful women but has always managed to stay one step ahead of commitment. That all comes to an end when he meets Ashley. He doesn’t care where this beautiful, yet unusual lass came from, he’s just happy to have found her. Ashley cannot resist the handsome Scot and finds herself falling hopelessly in love. In the process, a secret is revealed, a battle is waged and Ashley must ultimately decide whether to return to her own time or give up her 21st-century life to stay with the love she has found in the past.
Scroll up and grab a copy today. 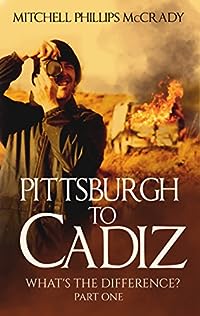 Pittsburgh to Cadiz – What’s the Difference? (Part One Book 1)
by Mitchell Phillips McCrady

The first book of series, the adventure leaves from Pittsburgh, PA. The year is 1998, (just before cell phones and social media). Long days mean nothing when there’s a reason. After painting all summer, Mitch and his coworker Kevin head to Europe. With one-way tickets, the only way to commit, they wait a couple days at Kevin’s buddy’s flat in NYC, before at last landing in Luxembourg. After getting lost in Amsterdam, they then wait for the final leg in Manchester, England. Contracted to harvest Christmas trees, of all things, Mitch’s twenty-seventh birthday is on the same day they leave for the Highlands of Scotland. A hard, cold place. A dark humor, with stark personalities, Mitch battles with his traveling partner, the weather, and his penchant for drugs and alcohol. He’s searching for the difference in life and the real meaning of art. He has a guitar, a camera, a snowboard — nothing out of the ordinary. Everyone does this, right?