If you are looking for a great fantasy series to start than look no farther than authors Emerson Knight and McKenzie Hunter. This story will have you hooked, from it’s new and different perspective, to the well developed characters, you won’t be able to put this book down. Enjoy! 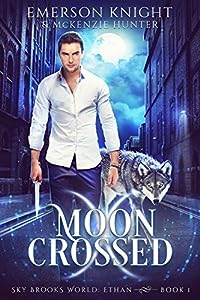 Pack life is dangerous on an ordinary day. But now the vampires have broken a tentative truce, and a young lone wolf is at the heart of a secret scheme to shift the balance of supernatural power forever. Ethan — Beta of the most powerful pack in the country, the Midwest Pack — must keep those he cares for safe.

Skylar barely understands what she is, and her introduction to the supernatural world is terrifying. In her eyes, werewolves are no different than the vampires who killed her mother. As the vampires’ efforts to capture her grow bolder, she reluctantly accepts the Midwest Pack’s assistance. Ethan soon discovers Skylar is more than she seems — a werewolf who can wield magic in previously unknown and dangerous ways. The list of Skylar’s enemies grows, and some in the pack want to kill her to prevent a larger catastrophe. Will Ethan risk the lives of his brother and packmates to protect a woman he doesn’t know?