They Call Me Crazy by Kelly Stone Gamble 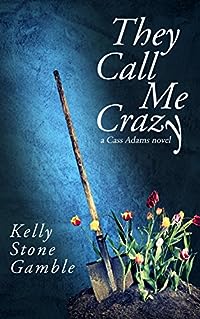 Cass Adams is crazy, and everyone in Deacon, Kansas, knows it. But when her good-for-nothing husband, Roland, goes missing, no one suspects that Cass buried him in their unfinished koi pond. Too bad he doesn’t stay there for long. Cass gets arrested on the banks of the Spring River for dumping his corpse after heavy rain partially unearths it.

The police chief wants a quick verdict — he’s running for sheriff and has no time for crazy talk. But like Roland’s corpse, secrets start to surface, and they bring more to light than anybody expected. Everyone in Cass’s life thinks they know her — her psychic grandmother, her promiscuous ex-best friend, her worm-farming brother-in-law, and maybe even her local ghost. But after years of separate silences, no one knows the whole truth. Except Roland. And he’s not talking.