Salmon Fishing in The Yemen by Paul Torday

An unassuming scientist takes an unbelievable adventure in the Middle East in this “extraordinary” novel — the inspiration for the major motion picture starring Ewan McGregor (The Guardian). 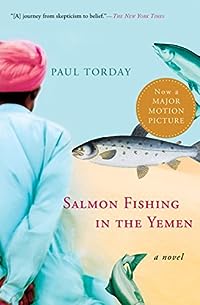 Salmon Fishing in the Yemen: A Novel
by Paul Torday

Dr. Alfred Jones lives a quiet, predictable life. He works as a civil servant for the National Centre for Fisheries Excellence in London; his wife, Mary, is a determined, no-nonsense financier; he has simple routines and unassuming ambitions. Then he meets Muhammad bin Zaidi bani Tihama, a Yemeni sheikh with money to spend and a fantastic — and ludicrous — dream of bringing the sport of salmon fishing to his home country.

Suddenly, Dr. Jones is swept up in an outrageous plot to attempt the impossible, persuaded by both the sheikh himself and power-hungry members of the British government who want nothing more than to spend the sheikh’s considerable wealth. But somewhere amid the bureaucratic spin and Yemeni tall tales, Dr. Jones finds himself thinking bigger, bolder, and more impossibly than he ever has before.

Told through letters, emails, interview transcripts, newspaper articles, and personal journal entries, Salmon Fishing in the Yemen is “a triumph” that both takes aim at institutional absurdity and gives loving support to the ideas of hopes, dreams, and accomplishing the impossible (The Guardian).