The Age of Anomaly

The Age of Anomaly is a must read for all of those interested in the goings on of the uncertain world financial markets and the troubling signs ahead. Andrei Polgar painstakingly works to help explain anomalies of the past in order to help us understand where things are heading. This is a timely read coinciding with the cryptocurrency boom and troubling signs we see across the financial systems of the world. 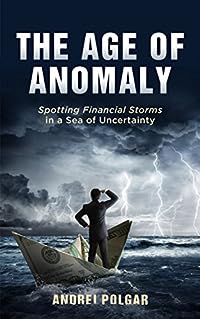 The Age of Anomaly: Spotting Financial Storms in a Sea of Uncertainty
by Andrei Polgar

Something is seriously wrong with the economy, the financial system and ultimately, our way of life. You’re probably reading this because, well, you feel the same way.

Perhaps you’re worried about one specific scenario (the death of the banking system, hyperinflation or something else) but then again, maybe you’re not able to identify specific threats. Instead, you just feel “something” is wrong. You feel it deep down inside and it haunts you.

Rightfully so, in my opinion!

The Age of Anomaly is here to provide much-needed clarity. My name is Andrei Polgar but a lot of you might know me as “the One Minute Economics guy on YouTube” and I’ve never been an economist who desperately wants to sound intelligent.

Instead, through my work, I’ve had one goal and one goal only: making economics easy to understand, something traditional education has failed at remarkably. As time passes, my work is featured in more and more universities all over the world. Students love it, people who already graduated feel the same way and even those who aren’t necessarily interested in economics become fascinated by this often misunderstood but amazing field.

For one simple reason: because it works.

Through The Age of Anomaly, I’ve made it clear that understanding financial calamities and being prepared doesn’t have to involve rocket science. Anyone can do it and frankly, everyone should do it.

I’ve provided a “from A to Z” perspective by:

1) Analyzing quite a few hand-picked economic calamities of the past, from the Tulip Mania to the Great Depression, the Great Recession and even case studies pretty much nobody heard of such as the Short Domain Mania of 2015-2016

3) Explaining that becoming better at spotting financial storms is just not enough. Even I may very well end up being caught off-guard by the next crash and as such, it makes sense to dedicate just at much energy to becoming more resilient in general so as to better withstand anything life throws your way

By becoming good at spotting financial storms as well as resilient, you’ll be multiple orders of magnitude (and I consider even this the understatement of the century) better off than the average individual, who blissfully chooses to live in a bubble of ignorance!