A Wild Ride Ahead 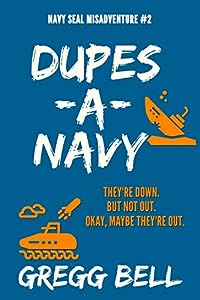 Being Navy SEALs was everything to new partners Shelby Ryder, a Kansas farm girl, and Earl Bernstein, a hypochondriac from big city Chicago. They completed their first mission successfully, but okay, in the process they accidentally blew up an F-16, wiped out a regiment of Cuban soldiers and caused an international incident. Despite the little hiccups, they were expecting a hero’s welcome, so they were stunned when the unscrupulous administration in Washington duped, dumped and, worst of all, de-SEALed them.

The Navy always thought for them. Now they have to think for themselves. And that’s a scary thought.

They’re downhearted but not defeated. Despondent but not done. No, embers of the SEAL spirit still burn within them, and along with their de-SEALed commanding officer, eighty-five-year-old Bertha “Bull” Gompers, they set out to clear their names, be re-SEALed and prove to the world that they’re not zeros. They’re heroes.

In their minds anyway.