A Fox Stole The Red Stone

It’s been a week since I have been to Target. I have to get dog food. I bet I don’t even know where anything is anymore. 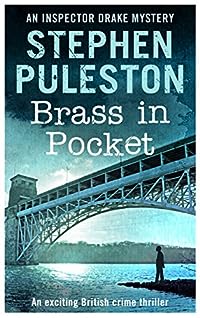 When Inspector Ian Drake arrives at the scene it sickens him to the core. Now he has a killer to find.

The killer starts sending the Wales Police Service lyrics from famous rock songs. Are they messages or is there some hidden meaning in them?

Does it all mean more killings are likely? When a politician is killed Drake has his answer. And then the killer sends more song lyrics. Now Drake has to face the possibility of more deaths but with numbers dominating the case Drake has to face his own rituals and obsessions.

Read Brass in Pocket today because we all love a gripping mystery with great characters. 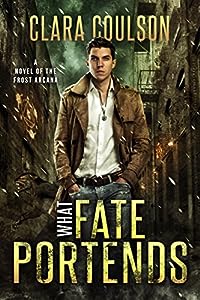 What Fate Portends (The Frost Arcana Book 1)
by Clara Coulson

“Faeries liked to tease the weak, but they loved to annihilate the strong.”

Seven years ago, the exposure of the paranormal led to the tumultuous downfall of human society. Now, the legions of the fae rule the broken world, and humanity has nothing left but a handful of protected cities and a heaping helping of regret.

Enter Vincent Whelan. Half fae and former cop, he’s become the best-known stretch scavenger in Kinsale, North Carolina, braving the “stretches” outside his city to recover precious items lost in the collapse. He makes good money. Lives the good life. Has a good future in store. As long as he can ignore his traumatic memories of the past.

But when a new job with an odd twist blows onto his doorstep, Vince finds himself unwittingly drawn into a vast conspiracy lurking underneath Kinsale’s thin veneer of civilization. Old friends suddenly return to haunt him. New enemies appear at every turn. And Vince fears he isn’t prepared to confront either one.

But if he doesn’t put his detective hat back on and solve this case on a tight deadline, then what’s left of the city he calls home might just crumble to dust.

What Fate Portends is the first novel of The Frost Arcana, an action-packed urban fantasy series set in a post-apocalyptic world. 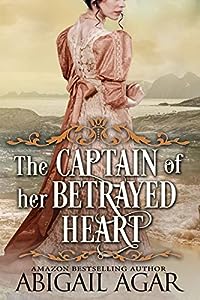 The Captain of Her Betrayed Heart: A Historical Regency Romance Book
by Abigail Agar

After what should have been one of the happiest nights of her life turned tragic, Gwyn decides to run away from England and everything she knew and loved. For four years, she lived in India far away from memories of the man who had broken her heart to pieces. But then, an urgent letter suddenly arrives and beckons her to return home! Her family is in shambles and her father sick. She has little choice but to do her part and step back into society. That would have been a lot easier, if Jack Shelton, the man who taught her to put trust in no one, had not returned from war. How can she move on when her thoughts seem determined to surround the man?

Four years ago, Jack decided to join the army, when the woman he had loved fiercely had fled with no sign as to why. Now it’s time Jack returns home, to find himself in an unexpected situation. Not only did his family call upon him to redeem their name, but Jack is also forced to face Gwyn Stanton. This woman left him questioning everything, when she raced off to India without a word as to why she had broken off their engagement. As much as Jack tries to do what he must for his family’s sake, Gwyn is everywhere. Why does she seem to hate him so much?

The announcements of Jack’s impending betrothal and Gwyn’s own ardent suitor seem to mean the end for everything that Jack and Gwyn might rekindle… but can this love really be buried? Will they show their true feelings to each other after all these years? 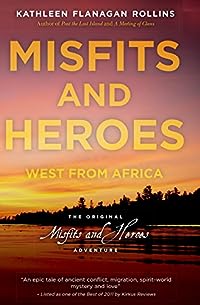 Misfits and Heroes: West from Africa
by Kathleen Rollins

A thief offers a woman a chance at a new life by cutting her bonds, beginning a journey that will take both of them downriver and out to the coast of West Africa. The time is 12,000 BC, and war is breaking out between the villages on the coast. Frantic to escape, the two travelers join others fleeing the chaos of battle. They think they’ll be safe if they head down the coast by boat, but the sea sweeps them out into a new, very different world and a destiny they couldn’t have imagined. 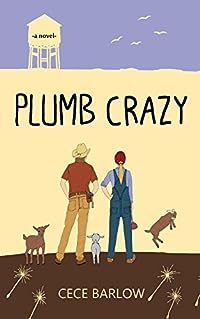 The summer of her junior year, Texas geek girl Elva Presley Hicks lands a job as a plumber’s helper in Houston, Texas. She earns $$$$, but is as lonely as heck.

It’s not like there aren’t any suitors. Elva could choose Chase, the obese pig farmer, or Wyatt, the plumber with wandering hands, but she yearns for something more and finds it with electrician, Mitch McCall.

It’s a cosmic connection. Mitch isn’t turned off by Elva’s name or fan fiction writing, and Elva doesn’t lose interest in him after he cuts off his nose.

This summer is destined to be Elva’s most memorable. Join her!