The Winter of Swords: A Grimdark Epic (Overthrown Book 1) by Aaron Bunce

“A fast-paced saga filled with dark magic, flawed heroes, and the occasional six-limbed intelligent beast! The Winter of Swords delivers on all counts, a sweeping epicfantasy that introduces us to the land of Denoril and the courageous, desperate few who are the world’s only hope.” – Dennis Green,author of the Traveler Trilogy 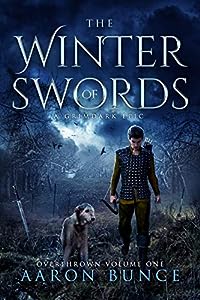 An intelligent, six-limbed beast snatches a girl away from her family.

An orphan confronts the darkness in his past, while a menace stalks his small town.

A young woman, cast into servitude, tries to forge her own path in an unforgiving world.

And an inexperienced soldier following the path of honor and duty comes face to face with a foe born from his worst nightmares. Seemingly unconnected, this small group of normal folk will fight for survival, for an ancient evil has awakened, and Denoril will need heroes if it is to survive the Winter of Swords.