The Heritage Series by Ciana Stone

Heritage is an ongoing tale, a saga of the Walker family, owners and operators of the largest family owned ranch in the country. They take their stewardship of the land seriously and work hard to maintain their hard-earned organic status. At present Heritage is under the leadership of Russell Walker, one of the twin sons of Robert Walker, a real Texas ranching legend. Russell’s twin brother, Richard, is a US Senator for the state of Texas, and some say, a shoe-in to become the next President. Politics aside, the Walker family has their hands full and their lives are full, if sometimes lonely. But love could be headed that way, at least for some of them. For others, there may be loss and sadness, but then that’s the way of life, isn’t it? And this family has some winning, living, losing and loving to do. Enjoy! 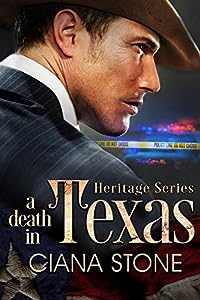 A Death in Texas (Heritage Book 1)
by Ciana Stone

Some things are bigger than yourself, like family and legacy.

Russell Walker knows all too well the demands of devotion. Heritage, the family’s legacy and the largest family-owned ranch in the country, is his responsibility and he’ll sacrifice anything for it. Including what might be his last and best chance for happiness.

If that’s what it takes, so be it. Until he passes the reins on to one of his children, he’s the guardian of the Walker legacy and determined to see it expand and flourish under his care.

The problem is, there’s a storm on the way and one he can’t stop. Someone wants to hurt his family and their legacy and he might just find himself in a fight he can’t win.

Then again, whoever’s gunning for him has never challenged the might of Heritage, and Russell, along with family, may well prove to be more than their enemy bargained for. 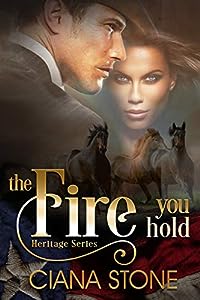 The Fire You Hold (Heritage Series Book 2)
by Ciana Stone

Some things are stronger than metal and stone, like loyalty and love. Which makes the loss of either, a blow that strikes clear through to the heart.

Loss has hit the Walker family hard, with the death of the family patriarch, and having the fiance of his grand-daughter accused of murdering him.

If that wasn’t enough, someone is determined to hurt both Heritage and Kal Burton, so it seems their fates are linked in more than Kal’s love for Cici Walker.

There’s a mystery to be solved and a lot of people determined to solve it, including the man who holds the reins of Heritage, Russell Walker. He’ll do whatever it takes to keep his family and their legacy safe, but it’s getting damned hard to know who he can trust. Right now, there’s only one person. Naomie Taylor. The woman who stirs his blood and makes him wish he was twenty years younger.