A “perceptive, affectionate, and often very funny” novel about old college friends at a thirty-year reunion, by the author of The Things They Carried (Boston Herald). 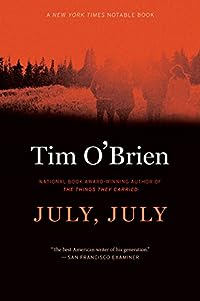 From a National Book Award winner who’s been called “the best American writer of his generation” (San Francisco Examiner), July, July tells the story of ten old friends who attended Darton Hall College together back in 1969, and now reunite for a summer weekend of dancing, drinking, flirting, reminiscing — and regretting.

The three decades since graduation have brought marriage and divorce, children and careers, hopes deferred and replaced. This witty, heart-rending novel about men and women who came into adulthood at a moment when American ideals and innocence began to fade, a New York Times Notable Book, is “deeply satisfying” (O, the Oprah Magazine) and “almost impossible to put down” (Austin American-Statesman).

“A symphony of American life.” — All Things Considered, NPR