The Shattered Chronicles by Ciana Stone

Join this ongoing tale to find out what happens when people begin to realize their vision of reality has been wrong all along. Nothing is what it seems. Not even themselves. Take the first step in a journey that will take you on a trip you won’t soon forget in The Shattered Chronicles. 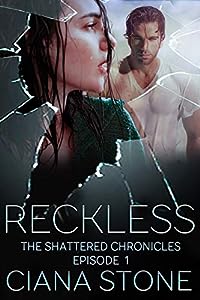 Reckless: Episode 1 of the Shattered Chronicles
by Ciana Stone

“OMG, it’s addictive! This series gets better with each book, taking you deeper into a reality you never imagined, with dangers and passions as powerful and dark as a storm. Dive in and get lost!” Candid book Reviews

“Perhaps my biggest sin was that my faith in Cord was so uncompromising and complete, I didn’t try and see him for who he was, but kept the fantasy of who I wanted him to be in place to mask the truth. And where did that get me? With a husband who’s run off on some reckless quest, a woman who claims she’s his lover and government agents who claim Cord is responsible for missing spent-nuclear-fuel. I’d say, at the moment, I win the prize for whose life sucks the most. The question is, how do I put things back the way they were? ” Morgan Windwalker. 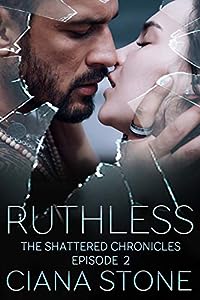 Ruthless: Episode 2 of the Shattered Chronicles
by Ciana Stone

“The plot just keeps getting better and better. I normally do not read series as I tend to forget the prior book and have a little trouble getting started again in the new release. Not with this series. I am biting my nails as the story is getting more and more complex and twisted as it goes along. I can’t read fast enough. Ms. Stone is a master story-teller. She weaves her magic throughout and I become one with the story. I am so going to read this series all over again and again.” – Amazon Review

“Maybe there are no innocent people left. Cord didn’t just cheat on me, he ran off and took up with some other woman and won’t even speak to me and now the government is threatening to take everything I have because according to them, Cord’s a criminal. Still, that doesn’t absolve me. I shouldn’t have kissed Victor. But the truth is, I wanted to. What’s worse is I can’t stop thinking about that kiss. Could someone please just turn the clock back to a time before my life fell apart?”- Morgan Windwalker

**Note for readers. This is an ongoing tale, therefore the books must be read in order. But don’t let that stop you from joining in to find out what happens when people begin to realize their vision of reality has been wrong all along. Nothing is what it seems. Not even themselves. 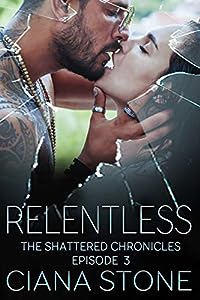 Relentless: Episode 3 of the Shattered Chronicles
by Ciana Stone

“From the first book this has been an emotional journey, and this installment will definitely put your feelings through the wringer and leave you desperate for what’s to come. This may be the best romantic suspense series I have ever read.” –Amazon Review

“Months of waiting and still Cord hasn’t had the decency to tell me face-to-face it’s over. Not an apology for leaving me to deal with the government or even a “sorry babe.” Just a postcard of him and that bitch Cassandra, cozy on a tropical beach. I’d step in front of a damn truck if it were not for Victor. Dear God, even thinking that fills me with shame. It’s almost as if he cast some kind of spell on me. And yes, I know that seems like I’m just a woman who doesn’t want to take credit for her own actions. But the truth is, Victor’s like a drug – dangerous and additive. You know damn well you should run like hell but instead you beg for more. What the hell’s happening to me?” Morgan Windwalker