Discover a renewed appreciation for art with this stunning collection of art, including movie posters, royal portraits, and war propaganda. 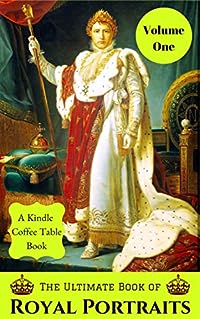 The Ultimate Book of Royal Portraits: Volume One: A Kindle Coffee Table Book
by Douglas DeLong

HUNDREDS OF DAZZLING ROYAL PORTRAITS AT YOUR FINGERTIPS!

This 3-volume series of royal portraits includes 560 digitally enhanced portraits of (mostly) European royalty from the 15th century through the 19th century. The portraits have been grouped according to the royal house to which the subjects belonged. In some cases, subjects from affiliated houses have been included within the main house. Each portrait includes some basic biographical information, presented on the page immediately preceding the portrait. Keep in mind that this is primarily an art book, not a history book. All the portraits have been selected based solely on their artistic merit. It will be left to others to provide a comprehensive history of the royals.

Royal portraiture has been around for centuries and has always been one of the perks of being rich and famous. The lowly peasants of the world were certainly not able to afford to have a world-renowned painter create a lavish portrait that presented them in their very best light.

It was the ancient Egyptians who first began to create portraits as a stylized profile. That sort of portraiture continued through the Greek and Roman periods. Around the 1500s, however, that begins to change. The subject of the portrait begins to turn to face the viewer. We see more of the person’s face and body as well as surrounding objects, and as you’ll see from the portraits in this book, we see what they are wearing – the lavish, extravagant and gorgeous clothes and costumes that let the viewer know that this is a very special and very important person. But most importantly, perhaps, is the way that their eyes meet those of the viewer. It is their eyes that really draw you into the portrait and allow you to make a connection with a person from a time and place far removed from your 21st-century life.

It was the Stuart royal family (1603-1714) who first began to understand the importance of the royal portrait as a way to promote their reign and their policies. Their reign coincided with the explosion of a print culture that allowed them to cheaply reproduce their portrait images in pamphlets that could be distributed among the public as a way to promote and brand the monarchy. The portraits could also be found hanging on the walls of palaces, government buildings and in the homes of the aristocracy.

Most of the portraits in this book have a certain photorealistic quality to them, although in many cases, it was not necessarily considered important to have an authentic likeness. It was often more important that the portrait show a version of how the royal person wished to be seen; a kind of early photoshopping. The royal would often demand that the painter present him in the most flattering light which would, in many cases, severely limit the painter’s ability to express his creativity. In some cases, it was nearly impossible to create a flattering portrait because generations of inbreeding had created deformities in many of the family members. The most famous example of this phenomenon was the “Habsburg jaw,” a protruding jaw shared by many members of the House of Habsburg, which is evident in some of the portraits in this book.

Occasionally a painter would sabotage the royal person by painting him or her in an unflattering light in order to make a political statement. The Spanish painter Francisco Goya was known to have deliberately painted some of his royal subjects as, shall we say, less than beautiful in order to express his contempt for how common folk were treated by the royals. This may have limited his ability to find work as a royal portraitist. 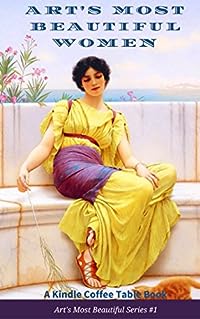 ENJOY THIS BEAUTIFUL KINDLE COFFEE TABLE BOOK PACKED WITH SOME OF THE WORLD’S GREATEST WORKS OF ART!

The female form has long been a favorite subject for artists around the world. In this collection, we present nearly 200 digitally-enhanced high-resolution works of art from 16 of the world’s greatest painters. Each artist has their own unique perspective, but all have captured the beauty of their subjects in intimate and beguiling portraits. The paintings in this collection were created in the late 19th and early 20th centuries by artists from England, Spain, France, and Italy. Several different art movements are represented, including Pre-Rapaelite, French Academic, Symbolism, and Arts and Crafts.

In the Featured Artists section, you will find a short biography of each artist with links provided to more in-depth information. The paintings are presented in galleries, with each gallery preceded by a guide which will identify each painting by title and year (when available). Portraits or photos of each artist are also included (when available).

This is the first volume in a series of “Art’s Most Beautiful” Kindle Coffee Table Books. 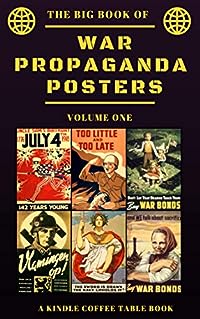 HUNDREDS OF FASCINATING DIGITALLY ENHANCED POSTERS FROM WW1 AND WW2!

(This is the first volume of a three-volume set of war propaganda posters. It features over 200 high-resolution images that have been digitally-enhanced in order to give them maximum impact.)

This series of Kindle Coffee Table Books consists of nearly 700 war propaganda posters, mostly from the United States (which produced nearly 200,000 different designs), but also from a number of other countries. The bulk of the collection is from World War Two, with a smaller number from World War One. Chapters have been organized to represent different themes. They include such things as encouraging people to buy war bonds, motivating workers in factories to produce more armaments and other war necessities, warning soldiers about the dangers of venereal diseases, creating a patriotic fervor among the populace and, of course, demonizing the enemy. Posters were placed in places such as factories, post offices, train stations, schools, restaurants, and stores.

Many of the posters in this collection are rather dark and even gruesome, and one of the more troubling aspects of the posters is the vicious racist portrayals of the enemies, primarily the Japanese. Apparently, if you wanted to demonize the enemy in wartime, it was considered permissible to be over-the-top in depicting racist images.

But the main purpose of this series is to foster an appreciation for the art and the artists that created these remarkable posters. Competitions were held among government agencies, which would then choose the best designs. The artists were not compensated for their work, but perhaps saw it as their patriotic contribution to the war effort. 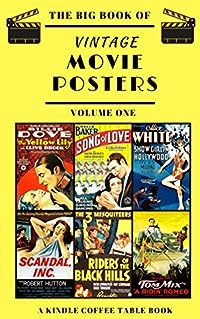 (This Kindle Coffee Table Book is the first volume of a three-volume set of vintage hand-painted movie posters. The entire series consists of over 600 high-resolution images that have been digitally-enhanced in order to give them maximum impact. Most posters represent movies from the first three decades of the 20th century.)

These days most movie posters use photographs of scenes or characters from the movie but before the 1990s most movie posters employed hand-painted art to depict the scenes or characters. Viewing these stunning posters, it becomes evident that they didn’t skimp on the budget for the art department, hiring well-known artists to create their posters, which had become an integral part of movie studio advertising. Unfortunately for the artists, they were rarely given credit for their work, with their signatures almost never appearing on the poster.

Posters have been used almost from the very beginning of film exhibitions, with the first poster being made for L’Arroseur Arrose, an 1895 movie by the Lumiere brothers in France. Today, movie posters are traditionally displayed inside or outside of the theater where the movie is playing, as well as in various media for advertising purposes, although these days many theaters use video displays instead of paper posters.

Historically, many movie posters ended up being thrown out after they were no longer needed, but some ended up in the hands of collectors and today there is a thriving market for collectible movie posters. On December 11, 1990, Christie’s presented the first ever auction by a major auction house consisting exclusively of vintage movie posters, raking in a total of $935,000 for 271 posters. The most money ever paid for a single movie poster is $690,000, for Fritz Lang’s 1927 film Metropolis from the Reel Poster Gallery in London. Early American horror films have been especially in demand by collectors, with a poster for The Mummy being sold for $452,000 in 1997. In 2011, 33 movie posters from 1930-1931 were found in an attic in Berwick, Pennsylvania, where they had been used for insulation, and auctioned for $502,000 in March 2012. So the moral of the story is – check your attic!

The focus of this book is on the remarkable art that was used to create these truly beautiful posters, but you may find yourself intrigued by some of these movies, many of which you were perhaps unaware. So if you’re a lover of vintage movies, the good news is that many of these movies are available for your viewing pleasure on YouTube. 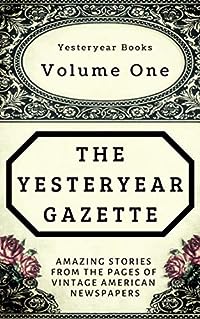 The Yesteryear Gazette: Volume One: Amazing Stories From the Pages of Vintage American Newspapers
by Douglas DeLong

BECOME AN EYEWITNESS TO HISTORY!

Buried deep within the pages of America’s newspapers from a century ago are an untold number of amazing stories waiting to be discovered. If you’re a history buff or just love a great story, you’ll love The Yesteryear Gazette!

?Thanks to the phenomenal digital collection of vintage American newspapers assembled by the Library of Congress, you can now enjoy a ringside seat to historical and cultural events from a century or more ago. In this first volume of The Yesteryear Gazette, we have collected twenty of the most compelling, moving, humorous and quirky stories from this treasure trove of American newspapers, each one illustrated with fascinating vintage photos.

Highlights include…
• The first newspaper accounts of the 1865 Lincoln assassination.

• A deeply moving firsthand account of a Titanic survivor.

• The riveting newspaper accounts of the 1893 Lizzie Borden trial.

• The story of the first woman to ride a bicycle around the world.

• A fun interview with the quirky Eva Tanguay, the Queen of Vaudeville.

• The horrifying accounts of the 1903 Chicago theater fire that killed over 600 people.

• The tragic newspaper accounts of the 1906 San Francisco earthquake.

All of these stories have been carefully transcribed directly from the original newspaper stories. Some have been edited for length or clarity. Each story includes a link to the original newspaper story, as well as links to additional information. Most stories also include a link to a related video. Each story, as well, includes an introduction in order to provide some background and context.