The Shanghai Factor: A Novel by Charles McCarry

“ smart and utterly diverting spy trade masterwork” from the acclaimed author of The Tears of Autumn (NPR). 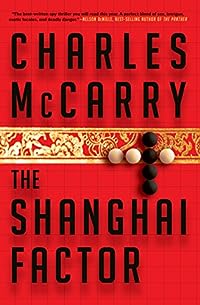 The Shanghai Factor: A Novel
by Charles McCarry

When two people collide on their bikes on an empty road, the meeting can hardly be by chance — especially when one of the people in question is working for the shadowy American espionage organization known as HQ, and the other seems to be involved in a similarly secretive Chinese operation. But when sparks fly, the two fall into a dangerous romance with international implications.

The young American spy was sent to China simply to absorb what he could about the language and culture. But as his dalliance with the mysterious Mei blossoms into a full-blown affair, his bosses at HQ demand he use his connections to uncover the truth about a powerful CEO suspected to be a Chinese intelligence operative. Now he’s caught in a game of cat-and-mouse with lethal consequences — not only for him, but also for the global balance of power.