The Whisper of a Saint by Richard Dietrich Maddox

“The Whisper of a Saint” is an awe-inspiring spiritual novel. If you like Enlightenment quests, ancient Indian spiritual guidance, and vibrant portrayals of the Himalayan wilderness, then you’ll love Richard Dietrich Maddox’s empowering tale. Get “The Whisper of a Saint” today to embark on a reading adventure such as you have never before enjoyed! 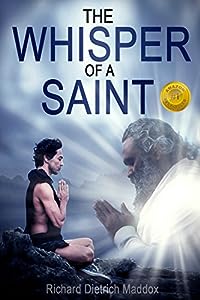 The Whisper of a Saint: A Search for the Permanent Bliss of Enlightenment
by Richard Dietrich Maddox

Theo is a successful Silicon Valley executive. But one fateful day, a guru appears in a vision and calls him to the Himalayas.

While most children played with toys, a certain boy saw visions of a white-robed Holy Man. The child grew from adolescence to manhood, but never forgot the image of his guru. When his teacher tells the 50-year-old pupil to leave the U.S. and find him on the other side of the world, the man jumps on a plane bound for India…

But the American’s journey of self-discovery has only just begun. In the mystical mountain passes of the Himalayas, he encounters wonders that are strange, beautiful, and inspiring. Can he find the ultimate spiritual truth of Enlightenment in the modern world?