Out Of Time Series By Monique Martin

Let’s start this wonderful Tuesday morning off right with the amazing Out of Time series by Monique Martin. “A stunning achievement of narrative, storytelling, character, and chemistry…. Monique Martin has a master’s touch with an adventure yarn… a great read that will sweep away men and women alike.” –Steve Windwalker of Kindle Nation Daily 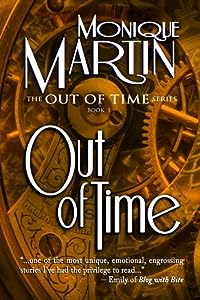 Out of Time: A Time Travel Mystery (Out of Time #1)
by Monique Martin

Professor Simon Cross has spent his life searching for evidence of vampires and avoiding emotional entanglements. When a mysterious accident transports Simon and his assistant, Elizabeth West, back in time, Simon finally finds both the proof that he’s been looking for, and the romance that he hasn’t.

Simon and Elizabeth’s developing relationship is tested by demons real and imagined. In 1920s Manhattan, there are more than mobsters vying for power in the city’s speakeasies. When the local kingpin with a dark secret sets his sights on Elizabeth, day to day struggles become a fight for their very lives. 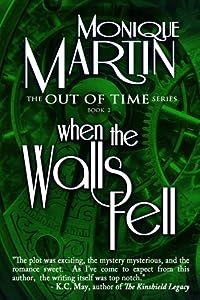 When the Walls Fell (Out of Time #2)
by Monique Martin

Professor Simon Cross and his assistant Elizabeth West have returned from their accidental journey into the past and are adjusting to their new life together as a couple. But an unwanted visit from the Council for Temporal Studies could change everything.

A murder in the past is changing the future, and if the killing isn’t stopped, Simon Cross might never be born.

When they arrive in 1906 San Francisco, Elizabeth and Simon have no idea who wants Victor Graham dead or how it will happen. With the earthquake that leveled most of the city just days away, the race to save Graham thrusts them into a complex mystery of jealousy and revenge where murder might be the least of their worries. 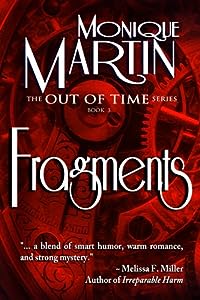 Fragments (Out of Time #3)
by Monique Martin

Professor Simon Cross and his assistant, Elizabeth West, thought their time traveling days were over. That’s before they stumble across a World War II photograph — with missing time traveler, Evan Eldridge, injured and in desperate need of help.

They find Evan in 1942 London, ill and not quite sure what’s happened. He remembers only one thing with crystal clarity — the whereabouts of an artifact Hitler believes can win the war. That’s information every Nazi spy in the country would kill to know.

As if saving Evan and surviving war-torn England weren’t enough, the outcome of the war hinges on Simon and Elizabeth finding Evan’s artifact before the Nazis do. But time is running out: for them, for London, for the world. 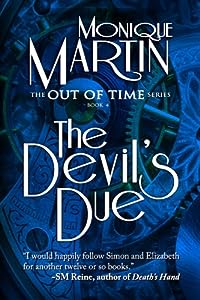 The Devil’s Due (Out of Time #4)
by Monique Martin

Simon and Elizabeth return in book four of the Out of Time series.

Simon and Elizabeth’s plans for their honeymoon are interrupted when they discover a list of unfinished business hidden in Simon’s grandfather’s journal. Picking up where Grandfather Sebastian left off, Simon and Elizabeth, along with Jack Wells, travel to glamorous 1933 Hollywood to save the life of movie star Alan Grant. But the Golden Age of Hollywood is more than parties and premieres. Behind the bright lights and bigger-than-life contracts, shadows lurk and no one is what they seem. It’s a place where people will do anything for fame and fortune. And if Simon and Elizabeth fail, more than a man’s life might be lost. 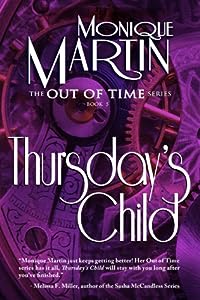 Thursday’s Child (Out of Time #5)
by Monique Martin

The Crosses — renowned Professor of the Occult Simon and irrepressible Elizabeth — set off on their latest time traveling adventure. Leaving Jack behind to nurse his broken heart, the couple travels to 1852 Natchez, Mississippi to help the next person on grandfather Sebastian’s list, Mary Stewart. There’s just one problem. Little Mary Stewart, just 8 years old, died two days ago.

Mary’s spirit cannot rest until Simon and Elizabeth solve the mystery of both her life and death. But Mary cannot speak, and there are those who are willing to kill to keep the past buried.

Simon and Elizabeth discover first-hand that dark secrets in the Antebellum South hide pasts murkier than the river bottom and twice as dangerous.