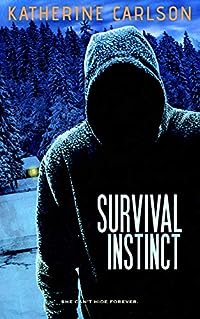 She didn’t know it at the time.

But she blames her own demons for steering her into such a black orbit.

Now, she’s running for her life…

Stumbling through the frozen woods, she’s mad-lucky to find the decrepit cabin. But she can only hide so long. Their final showdown awaits. At least she’s stopped lying to herself about his depravity-so impossible to withstand, let alone outwit. Maybe she doesn’t deserve to get away given her complicity over the years.

Still, a budding survival instinct within, Nag, disagrees with her assessment. The strongest part of herself won’t allow an easy surrender. Nag changes the odds.

And the odds stack up against her. Plummeting temperatures, endless wilderness, and festering evil diminish any chance of escape. Only one question remains: can she root out the inner villains and flip the script on her inevitable demise? 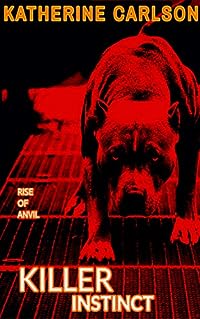 Sometimes evil is made, handcrafted by circumstance. Sometimes it’s born of the void.
~Phoebe Gates

In this chilling sequel to Survival Instinct, Jeannie Parker-having just survived her serial killer husband-must battle a different sort of evil-more formidable by orders of magnitude. In fact, she must outwit the man who corrupted her husband in the first place. For this task, she gains assistance from a different sort of hero: a scrawny waitress who happens to be fearless. Together, Jeannie and her new sidekick, Phoebe, must battle Anvil-a bottomless pit of malice-born in defiant opposition to the first rays of primordial light.

GORGE: a novel of suspense
by Katherine Carlson

A litany of confessions.

A maze of tribulations.

A test of endurance.

Dangerously obese Marty Clawson persuades her cheating husband to dump her in the woods where she hopes to be scared skinny.

But her fantasies about heroic outdoor survival flop as hard as her marriage. Dejected beyond measure, she takes a bus to Montana to visit an old high school suitor-someone she once suspected too sinister to pursue.

Turns out her initial suspicions about him were spot-on. She soon finds herself in the exact predicament she’d so long imagined. Only now she must outwit a vast wilderness… and sheer evil.

Marty Clawson’s got a big problem: 264 pounds’ worth. Doc warns of dire consequences if something doesn’t change, but Marty’s already tried every diet on the market plus an endless list of her own concoctions. Still, she devises a NEW PLAN-and unlike the others-this one is terrifying: a rendezvous with the state park, a place she considers the very heart of darkness (and snack-free) where she won’t emerge again until she is thin. Hubby Raymond believes the method too dangerous-abandoning his super-sized wife like a broken dresser-and refuses to help with her scheme; his crap attitude, along with everything else, changes when she catches him in bed with an aging porn star.

Surviving the backwoods alone is challenging for a seasoned outdoorsman but unthinkable for a woman nearing red-alert obesity; yet, she believes it’s her last chance to avoid eating herself to death. Despite Ray’s newfound assistance, Marty fails at her plan. Desperate and depressed, she contacts Logan Myers, a peculiar boy from her past. Her hopelessness prompts her to accept his offer of bus fare north into the unforgiving Montana bush where he hunts and traps wild animals.

Logan soon reveals himself to be far worse than she remembered. So bad that he tosses her to the elements as punishment for rejecting him. In a wicked and ironic twist, her once farfetched idea morphs into an epic webof repetitious terrain and pure malevolence.

Now she needs to make it back to the Greyhound station before nightfall, without getting mauled by a random grizzly or discovered by a roaming psychopath determined to hunt her down.

THE CHASE IS ON.