What if you could see the state of someone’s soul, know their inner truth and detect their every lie? Find out in author Dante Lupinetti’s Sould Reader Series. A Christian thriller fiction with a little bit of Stephen King, a splash of Jack Ryan, a dash of Frank Peretti and a hint of Ted Dekker. Enjoy! 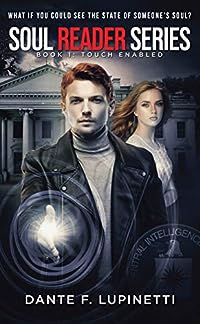 Zeke Jackson, a mild-mannered reporter with a checkered past, wants to be an on-air reporter but he has a stuttering problem. His boss sends him to a televangelist to be healed. After being slain in the spirit his stuttering disappears and he acquires an unexpected supernatural ability to see the state of people’s souls and detect their lies. As others seek to use or exploit his gift, he questions why he has it and its source. The CIA, who has worked extensively with psychics, notices his gift and hires him as an asset to help prevent an assassination plot on the president and vice president. When they bring in one of the suspects, Zeke extracts critical terrorist intel which enables the Secret Service and FBI to prevent the assassination and take down the terrorists.

Book 1 sets up the backdrop for Zeke in Book 2 to investigate the powers behind the assassination attempt. In the process he discovers a darkness and evil force that permeates the entire DC hill and realizes that the fight is “against the world forces of this darkness, against spiritual forces of wickedness in high places.”