If you like realistic fight scenes, compelling characters, and a gripping story, then you will love Paul J Bennett’s tale of a warrior who refuses to retreat. Pick up your copy today, and discover the realm of Merceria today!

Battle at the River: A Mercerian Short Story (Heir to the Crown)
by Paul J Bennett

An enemy commander. A skilled tactician. Only one can be victorious.

The Norland raiders are at it again. When the Baron of Bodden splits their defensive forces, Sergeant Gerald Matheson thinks that today is a day like any other, but this time, something is different. At the last moment, Gerald recognizes the warning signs, but they are outnumbered, outmaneuvered, and out of luck. How can they win this unbeatable battle?

Battle at the River is a stand-alone short story set in the World of Merceria that incorporates characters from the Heir to the Crown Series. If you like intense battle scenes and unexpected plot twists, then you will love Paul J Bennett’s tale of a soldier who thinks outside the box. 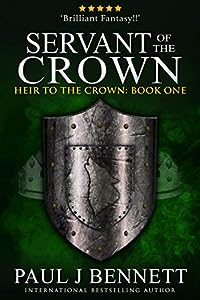 Servant of the Crown: An Epic Fantasy Novel (Heir to the Crown Book 1)
by Paul J Bennett

An old warrior, too stubborn to die. A royal heir, hidden since birth.

Can they save a realm on the brink of war?

Tragedy tears Gerald’s world apart and only his unwavering loyalty saves him. After serving as a soldier for years, a single act of self-sacrifice thrusts his future into the world of politics.

Cut off from all he knows, he becomes no more than a pawn to those in command. Banished with little more than the clothes on his back, he seeks a new purpose, for what is a warrior who has nothing left to fight for?

A fateful meeting with another lost soul unmasks a shocking secret, compelling him to take up the mantle of guardian. Bandits, the Black Hand, and even the king, he battles them all for the future of the realm.

Memories of the past, secrets that shape the future; his adventure is only the beginning.

Servant of the Crown is the series starter in the epic Heir to the Crown medieval fantasy series.

Mercerian Tales: The Call of Magic (Heir to the Crown)
by Paul J Bennett

For so long she tried to resist… but the woods call, beckoning her with their secrets.

Never one to shy away from adversity, Albreda grew up the day her mother died.

Now, her courage is put to the test when she finds herself lost in the mysterious and dangerous Whitewood, fighting for her life.

Discovering there is so much that she does not understand, she embarks on an adventure that will change her life forever.

Mercerian Tales: The Call of Magic, is the origin story of the Witch of the Whitewood, Mistress Albreda. It can be read at any time but is best when read between books four and five of the Heir to the Crown Series.

Fury of the Crown: An Epic Fantasy Novel (Heir to the Crown Book 8)
by Paul J Bennett

There can be no peace while any possibility of invasion remains

After beating back the Norlanders, the Mercerians decide on retribution through force of arms. Provoked by all that has happened, they are determined to do something that has never been done before — a full-scale invasion of Norland.

Weakened as they are, they must rely on their allies to increase their prospects for success. For the Orcs, it is a chance to reclaim their ancestral lands, while the Trolls seek to protect their new home. The Dwarves see it as an opportunity to increase trade, but for the Elves…

Even with Weldwyn coming to their aid, Queen Anna fears it’s still not enough to turn the tide of battle. Yet when refugees flood across the border, she has to wonder if it’s an opportunity for an unexpected ally or a clever deception.

On the eve of battle, just as the army is set to attack, word comes of a dark presence stalking the land, jeopardizing the entire invasion. Can they vanquish this ancient evil, or will they be consumed by it?

Join the campaign against Norland in Fury of the Crown, the fast-paced, riveting eighth book in the Heir to the Crown series. If you like dangerous situations, risky plans, and engrossing storylines, then this is the book for you!

Tear into your copy of Fury of the Crown, and witness the wrath of Merceria. 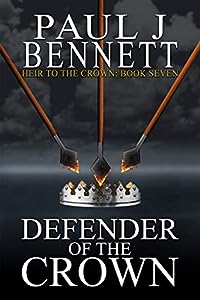 The enemy of my enemy is still my enemy!

As peace settles across the land, two great kingdoms prepare for a royal wedding. With all eyes focused on the celebrations, the unexpected arrival of a Norland delegation throws everything into chaos.

For generations, they have laid claim to the throne of Merceria, yet now they want to negotiate?

With her own nobles council in constant conflict, Queen Anna is forced to question the motive of this visit. Is it a trap, or a genuine desire to end hostilities?

Against the wisdom of her advisors, she travels north, determined to forge a new future for her people.

Will her unwavering desire for peace lead to the destruction of all she holds dear?

Journey with Anna and discover the true motives of the Norlanders in Defender of the Crown, book seven of Paul J Bennett’s Heir to the Crown series. If you like hidden agendas, desperate battles, and determined mages, then this is the book for you!

Settle in for a wild ride with Defender of the Crown, and give peace a chance!

New to the series? Meet Gerald Matheson, the steadfast warrior in Servant of the Crown, Heir to the Crown: Book One, available in eBook, Audiobook, and Paperback.