Author Columbkill Noonan has crafted a fascinating work of detective hi-jinks and fantasy mystery unlike any other. This extremely funny series contains two self-aware Sherlock and Watson wannabes that solve otherworldly mysteries, and will surely have you laughing out loud. See for yourself why this series is a absolute must read for mystery fans. Enjoy! 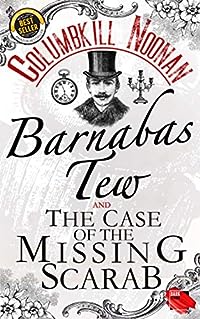 Barnabas Tew is a private detective struggling to survive in his trade in Victorian London. Fearing that he is not as clever as he had hoped to be, he is plagued by a lack of confidence brought on in no small part by his failure to prevent the untimely deaths of several of his clients.

Matters only get worse when Anubis, the Egyptian God of the Dead, is referred to Barnabas by a former client (who perished in a terribly unfortunate incident which was almost certainly not Barnabas’ fault). Anubis sends for Barnabas (in a most uncivilized manner) and tells him that the scarab beetle in charge of rolling the sun across the sky every day has been kidnapped, and perhaps dismembered entirely.

The Land of the Dead is in chaos, which will soon spill over into the Land of the Living if Barnabas – together with his trusty assistant, Wilfred – cannot set matters to right. Pulled from his predictable (if unremarkable) life in Marylebone, Barnabas must match his wits against the capricious and dangerous Egyptian gods in order to unravel the mystery of the missing beetle and thereby save the world.

Barnabas Tew and Wilfred Colby are back, and, once again, they’re in a bit of a pickle.

Barnabas and Wilfred, two earnest but bumbling Victorian detectives, travel through the Nine Worlds of Norse mythology, trying to stave off the impending end of the world – an event which the locals call Ragnarok. This time, however, the intrepid twosome has some help: a brave Viking seer named Brynhild and her flying horse.

Can the two plucky detectives and the fearsome Brynhild outwit those who would bring about Ragnarok? Will they survive the harsh conditions and terrifying creatures of the Norse afterlife?

Will they save the world… again? 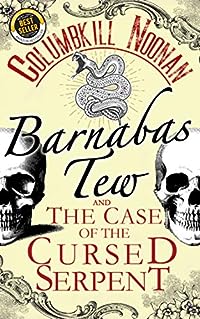 “For Queen, for Country, and for… Uncle Rabbit?”

Just when Barnabas and Wilfred thought the world was safe at last, along comes a new threat: the Mayan Lords of Death have hatched a plan to overthrow the natural order of things, involving a cursed serpent god, two untrustworthy sets of twins, and a dead bunny that must be resuscitated at all costs. Only Barnabas and Wilfred can possibly unravel the convoluted plot, but they face danger after danger as they attempt to do so. If they fail, up will be down and down will be up, and the evil Lords of Death will take over the heavens.

Do Barnabas and Wilfred have the courage, skill (and luck!) to save the world yet again? 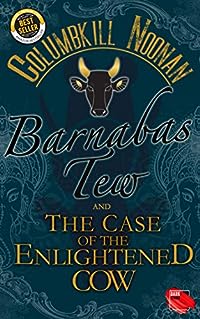 Barnabas Tew and The Case of The Enlightened Cow
by Columbkill Noonan, darkstroke books

Rama, the Hindu god who maintains dharma – or the balance of all things – is in terrible trouble, and only Barnabas and Wilfred can save him!

Private detectives to the gods, Barnabas Tew and Wilfred Colby, believed they’d discovered the secret to taking charge of their destinies. Unfortunately, nothing is as it seems and taking control is easier said than done.

Fresh off their most challenging case to date, the two detectives step into a cenote: an otherworldly portal that connects worlds and can take them anywhere. Each is hoping to be reunited with someone he left behind, but they soon realize that something has gone terribly, disastrously wrong. Unexpectedly, they find themselves in a Hindu temple, together with Kamadeva, the Hindu god of desire.

Kamadeva asks them to save his friend Rama, who is in grave danger. It seems an innocent enough request, but Barnabas and Wilfred have learned that not everything is at it seems, and the right thing to do is not always so obvious.

The detectives have faced dangerous deities before, but the Hindu gods are different. Otherworldly, wise, and full of shadowy motivations, they all seek to manipulate the hapless detectives to suit their purposes.

Can Barnabas and Wilfred see through the illusions and the lies to uncover the truth of the matter? Or will they fail, and choose the wrong side? 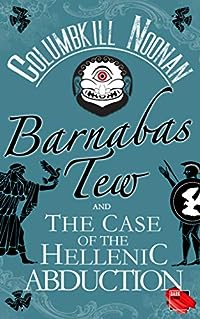 Demanding Greek gods. A world of intrigue. A mysterious helper.

Zeus is used to getting what he wants… but that was before he met Barnabas Tew!

Barnabas and Wilfred, the unluckiest detectives ever, are enjoying their time in India, working on mastering their emotions and learning how to do all sorts of interesting yoga poses. They feel as if they’ve finally found some peace in their lives.

Everything changes, though, when Zeus whisks them away from their idyllic retreat and demands that they solve a case for him.

Having no choice, they reluctantly accept the job, but quickly come to realize that nothing is as it should be. Zeus’ motives are suspect from the beginning, the rest of the Greek gods and goddesses are untrustworthy at best, and Barnabas soon finds his temper hasn’t improved at all during his time in India.

Who is the mysterious lady who keeps popping up just when they need her? Is she friend, or is she foe?

Will Barnabas and Wilfred figure out what’s right and what’s wrong in this topsy-turvy world of lies, intrigue, and trickery? Or will the Greek gods and goddesses prove too much for them?