This exciting collection by authors Avery Blake, David W. Wright, and Johnny B. Truant are relentless, action-packed tales of alien apocalypse that will leave you breathless – and ready for more. Enjoy! 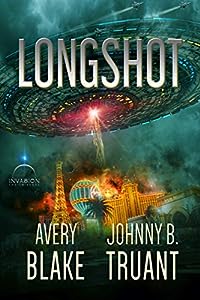 A brand new novel written in the BLOCKBUSTER, BESTSELLING, and READER-LOVED Alien Invasionuniverse.

While Las Vegas burns, John Abbot is on fire.

What’s a Gambler to do when the kind of winning streak he’s only ever dreamed about hits just as aliens invade and it looks like the world is coming to an end?

Even while Las Vegas catches fire all around him, John Abbot decides to let it ride. For the first time in his life it feels like he can do no wrong. But it’s gonna take more than a boatload of chips to survive the alien apocalypse. It might even require him to pull together the motley crew of left-over lowlifes and Vegas vagabonds to embark on a high-risk crusade.

In order to get a dying alien to Area 51, and hopefully save the world, John’s only hope is a disillusioned showgirl, a snarky comedian, a cynical slot machine junkie, and the rest of the Las Vegas leftovers.

Unless they die, and destroy the universe along the way.

It’s a race against time as the aliens arrive in this new stand-alone book in the Alien Invasion universe. 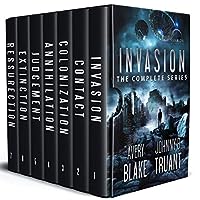 For the first time get the complete collection of all 7 books of the blockbuster Alien Invasion series; the breakout sci-fi series with over 1000 5-star reviews!

THEY ARE COMING. THE COUNTDOWN HAS BEGUN…

The discovery of objects approaching from Jupiter orbit sets humanity on edge, sending cities into panic. Most is unknown, but thanks to the popular Astral space app, everyone knows the few facts the government has tried to hide:

The objects are enormous spheres numbering in the dozens, maybe hundreds. They are on an approach vector toward Earth… and they will arrive in six days.

Entrepreneur Meyer Dempsey is in New York, realizing the time has come to act on all the preparations he’s made without ever consciously knowing why. For years Meyer has been preoccupied by a dreamlike sense of coming peril and knows where he must take his family… if, that is, they can make it before society eats itself alive with fear. 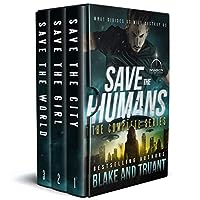 Save the Humans: The Complete Series (An Alien Invasion Science Fiction Series)
by Avery Blake, Johnny B. Truant

Save The Humans is the complete Boxset that pulls together the entire trilogy of books: Save The City, Save The Girl, and Save The World, all of the books set in the bestselling Alien Invasion Universe.

WHEN ALIENS INVADE, ONLY A CON MAN CAN SAVE THE DAY.

Hollis Palmer is not a good man. An unapologetic thief and womanizer, he has no time for anything that won’t profit him directly. So while the rest of the world is staring up in shock as aliens race toward Earth, Hollis is busy stealing a case valuable enough that he’ll be able to ride out any invasion in style.

But ET’s arrival proves to be a bigger catastrophe than Hollis – or humanity – expected. Meanwhile, his would-be hostage, Mia Davies, the trophy wife of his criminal boss, is making the aliens look like a walk in the park.

As their plans crumble along with the rest of the world, Hollis and Mia find themselves on the run from a motley crew of aliens, criminals, and crackpots. The two of them must figure out a way to work together without killing each other. 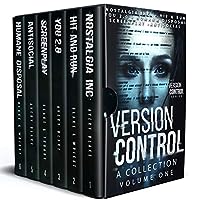 This collection pulls together all six books in Version Control, a new series that investigates what happens when our technology outpaces our ethics. Perfect for fans of Black Mirror and The Twilight Zone.

Nostalgia Inc: What if the price of your son’s life was just a few enhanced memories? What could go wrong?

Hit and Run: Jack should never have been out that morning. If he hadn’t been out, he never would’ve hit the girl on the bike or made the worst decision of his life — to flee the scene of the crime.

You 2.0: With the help of the new “Persona” upgrade implanted in his brain, Seth became the person he always knew he could be. Better than he expected. Worse than he imagined.

Screenplay: In the heat of an affair, nothing is what it seems – and Hell hath no fury like an artist scorned.

Antisocial: Know your truth. Speak your truth. Live your truth. To fully live her truth, Maeve cuts all the naysayers out of her life… except the five online friends who believe in her. But Maeve doesn’t know her five new besties are secretly connected… and have a hidden agenda.

Humane Disposal: A victim with no memory. A cop ordered to lie. A ticking clock.