Author Alan Asnen writes, “I am not dishonest about what I do. These books do not follow the standard genre formula and are not written for those who want that. They go out of the way to break that formula, challenge it, do end-runs around it, even make fun of it at times. If you want something different, try this. I cannot guarantee this will be the “different” you seek but seek and you may find! 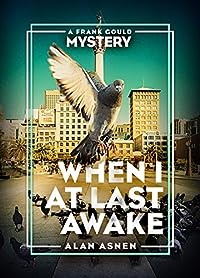 When I At Last Awake: A Frank Gould Mystery (THE FRANK GOULD MYSTERIES Book 5)
by Alan Asnen
Genre: Mystery

“As if Mickey Spillane, J.D. Salinger and Thomas Pynchon had a love-child… ”

A family friend returns from the dead in the form of a disturbed brother who decides upon a mission of revenge. But he ends up killing the wrong man and Frank Gould is asked to clear his name. The intended victim appears to be connected to an international scheme of horrendous proportions. One that led to the elder brother’s death. One that might lead to the end of the world as we know it. Or as Hollywood knows it… Or is it the Russians this time? The CIA? The Chinese?

Once again, the small leads Frank to the world at large and questions about his capacities that only time and space can answer. This time perhaps in space itself.

In this first “standalone” thriller, Frank is once again joined by his best friends, Paula Panday and Melissa Berger, along with a host of his other regulars from the previous four books in the series as they attempt to save the world when they cannot save the day. Or the other way around. Or neither. Maybe just stopping somewhere for a break. A nice spritzer. Wouldn’t you? I mean, given everything? Oh, and now Frank is learning to curse less as well…

A terrorist comes back from the dead and Frank Gould’s world is slowly turned upside down.
What Frank does not know as he sinks deeper into a trap, following tracks, is that the world at large is upside down. He has been buried away, inattentive, and now coming back to life like a drowning man struggling to the surface. A shore where once his wife and daughter lived… Where today he listens to a young woman convinced by her dying father of a crazy plot no one else believes.
Frank, once a man of letters, has been eking out a living by finding pets and lost objects, now and then a missing spouse for friends. Widowed for years and mending a broken heart. Here comes an opportunity for something big, a thrill ride, and an experience of youth.
Yet, there’s that trap awaiting, and as he moves deeper into it, his prior years of experience as a professor and journalist tell him something is amiss. He has other training as well… There may be more mysteries within Frank Gould than the mysteries he pursues outside.
This first in a four-part introduction to a new series begins a long story, setting things… in motion, as it were. Kind of a train getting started. Because, as you’ll discover, these are no small crimes and no small-time criminals.
What’s in a genre?
If I could chose my own I still would not know what to call it. That brilliant writer, Jay Stringer, invented his own, “social pulp,” which I love so much I’d like to claim it. But I cannot. That’s not mine. He’s far too “hard-boiled” for my pot.
Amazon and others have their well-defined algorithms to which we are all beholden (and enslaved). But if I owned enough shares here’s what I would tell them to do for me:
“Slap-yourself-silly-sarcasm-with-a-serious-side-mystery-and-a-hefty-dollop-of-romantic-comedy-thriller”
Only a mouthful if you aren’t a computer.
Did I mention mouthful? Quite a bit of that where I roam. Some of what sets me apart. Very apart. If they Netflixed this jobby they’d have to X out nearly three-quarters of the text. But then, that’s why we read, ain’t it? Some would say no. Sigh. I sigh a lot these days. Don’t you?
But then, that’s why we read. Instead of Netflix. Don’t get me wrong. I love my Netflix, too. Chomping at the bit. Waiting for that phone to ring… 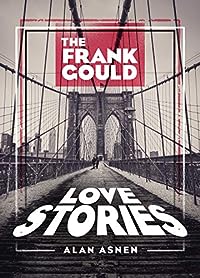 People love the wordplay… love the smart mouth and humor… They love the action. But what they want more of is the romance… Well, here it is in one volume. At least the first volume. And in this first volume an encapsulation of Frank Gould’s love affair with Robin Leontes, a romance that stretched across generations and boundaries, even continents. That withstood the forces of time and the challenges of other passing loves. A romance that instigated the mysteries of Frank’s life almost from the beginning and continually snared Robin in the traps of evil men. 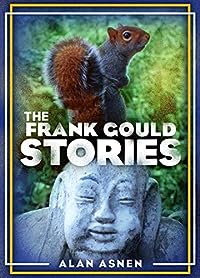 How did mild-mannered Frank Gould learn all those nasty spy tricks?
Does he really have an illegitimate child?
Was he ever a convicted felon?
These questions and more are answered in this new collection of short stories from the life of Frank Gould.
Some are from his past, some from his “present.”
Some have been told before and verbatim — more or less — in The Frank Gould Mystery Series. They have been pulled out, word for word — more or less — placed here for your amusement. Or entertainment. Or something like that. Depending upon your mood. Or your fancy. Or whatever takes you to the cleaners.
Others appear here for the first (and possibly last) time. One never knows, does one?
Still others constitute experiments, if you will. For that matter, even if you won’t. Ideas about Frank Gould that I have toyed with in different manners before deciding to go this way rather than that. So you may see some repetition. Which I would prefer to label “artistic variation.” You see, this makes me an artist.
Their order is random. Much as Frank is rather random at times. Hopefully, you’ve noticed.
Although much is revealed, please don’t expect too much to be given away.
Always remember: The Frank Gould Mystery is often about the mystery of Frank Gould himself.
Have fun. That’s what it is about in the end. 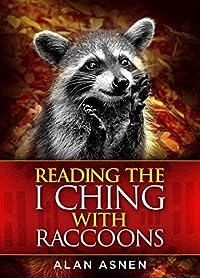 READING THE I CHING WITH RACCOONS
by Alan Asnen

“She stood next to me and stared with me out over the vast array of stars. ‘You might not get this, boy, but you are staring at garbage instead of food.”

Pandemics have you down? Like the I Ching itself, like all great mystical works, like the Great Baking and Gardening Workshops of Britain, we offer no guarantees for safety or saviors to come. We merely offer a few moments of necessary guidance, a turning away from disaster, respite and a couple of good laughs. Not recommended for children… regardless of what you may be thinking…
“People think raccoons eat garbage instead of food. We prefer food, like the food you feed us.’ She hugged my leg. ‘And thanks again for that. But we eat garbage when that’s all we can find… in order to survive. Or if we think that’s all we have available. But, you know, we are kind of limited. Raccoons, I mean.'”

Fully illustrated in color. On you favorite device or in your favorite hands.