The Moses and Rock series by A.D. Davies

The Moses and Rock series by A.D. Davies are fast paced  thrillers, featuring a pair of detectives who will push themselves to their limits to achieve what must be done. For fans of LJ Ross, JD Kirk, and even the BBC TV shows Luther and Line of Duty. Pick up your copy today. 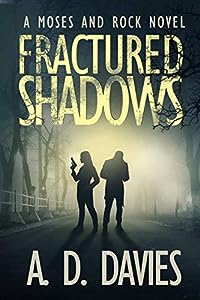 Fractured Shadows: A Moses and Rock Novel
by A. D. Davies

Does it take a corrupt detective to take down a corrupt police unit?

Detective Inspector Moses Glynn – a veteran investigator with a reputation for never backing down. But when he refuses to support his colleagues after a fatal police shooting, he finds himself without a friend on the force.

Detective Constable Juliette Rock – a former Army Captain; tough, resourceful, and recently divorced after coming out to herself. She is now on the fast track within the West Midlands Police, but a fresh start appeals to her.

Paired together in the secretive intelligence unit Division 43, Moses and Rock think their first case is an open-and-shut murder, quickly arresting the son of a notoriously brutal criminal. But when detectives from another station furnish the killer with an alibi, it is clear something deeply sinister is afoot.

Before long, Moses finds elements of his past crawling out of the dark and he begins to suspect that unproven allegations against him are the real reason he was chosen for this case.

As Moses and Rock delve into the symbiotic worlds of organized crime and police corruption, they must survive a shadowy underworld, colleagues willing to commit murder to protect themselves, and a history that Moses strives to conceal from everyone, including his new partner.

Their greatest strength might just be what tears them apart – that neither will ever back down.

No New Purpose: A Moses and Rock Novel
by A. D. Davies

When a killer rises, can a detective’s obsession deliver true justice?

After a successful investigation concludes, Detective Constable Juliette Rock is looking forward to some downtime. But when the failed assassination of a Member of Parliament is linked to the cold case she has been pursuing, she and Detective Inspector Moses Glynn are ordered to look into the new development.

Is it possible a hitman targeting hated members of society is linked to the man who forced Rock out of the Army?

As the Royal Military Police dodges tough questions, and with the special forces team they call in to consult clearly vested in avoiding suspicion, Rock believes her old foe is pulling strings to run interference. Despite warnings against it, she vows to prove his involvement with the murders.

As old loyalties clash with grudges that have never faded, DI Moses Glynn must find the right balance between keeping his and Rock’s instincts under control, and doing whatever it takes to stop the killing, learn who is covering up the crimes, and why.

No New Purpose is a British crime thriller that reunites Moses and Rock for an action-packed murder mystery that will strain their burgeoning partnership to the limit, and force them to trust one another more than ever before, if they are to survive their toughest case yet. 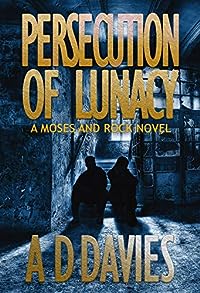 Persecution of Lunacy: A British Crime Thriller (Moses and Rock Book 3)
by A. D. Davies

A kidnapped little girl with no ransom demand.

Her mother, desperate to conceal the crimes that brought this on.

Two detectives – the first tasked with saving the girl, the second with jailing the mother.

Because Annalise is not simply a frightened mother, desperate to be reunited with her child. She and her illegal smuggling operation slipped through the chief inspector’s fingers once before, but this time no one is holding back.

Moses – tasked with rescuing the girl, but with no ransom demand and no leads, he calls upon dangerous tactics that could lose him his job, land him in jail, or even cost him his life.

Rock – undercover in the Mench household, dodging Annalise’s private security, probing family secrets, and trying to decide whether the mother is putting on a brave face, or if she’s a stone-cold sociopath, determined to conceal her secrets even if it means losing her daughter.

Reader note: each novel resolves its own story, and while it is more rewarding to read each book in order, you can pick up this series at any point.