If you are looking for a sweeping tale of courage, honor, and terror among the stars then you should look no further than the Soldiers of Earthrise by Daniel Arenson. You will not be able to put down this series. Enjoy! 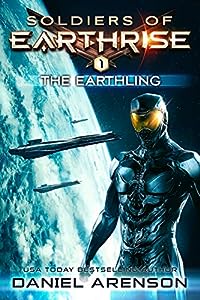 The Earthling (Soldiers of Earthrise Book 1)
by Daniel Arenson 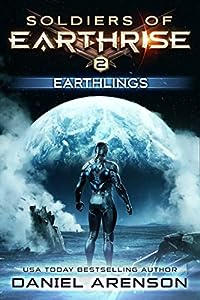 Conquering this backwater planet should have been easy.

But the natives are fighting back hard. The bodies pile up. The bombs keep falling. There is no end in sight.

Jon is an Earthling, a soldier eager to serve his world. But now he’s bogged down in the jungles of an alien planet. And the enemy is ruthless.

Maria is a Bahayan, a native of this world of deep forests and deeper secrets. Her ancestors came from Earth, Filipino colonists seeking a better life. But Maria was born on Bahay, and she would die to defend her homeworld.

Jon knows she is the enemy. That her betrothed, a cruel warlord, murdered his brother. Yet Jon cannot help it. He is drawn to Maria like a moth to the flame. And this flame might burn the galaxy.

As the war rages, secrets emerge. Lies unravel. Jon and Maria discover shocking truths… truths that could shake the very foundations of their worlds. 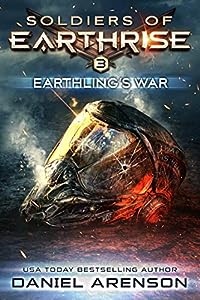 Two planets fight. Neither will back down. Earth, the center of a galactic empire. Bahay, a rebellious world. Heroes and villains fight on both sides.

And die on both sides.

Maria, a young Bahayan, was once a humble rice farmer. Now the fate of Bahay rests on her shoulders. With her beauty and charm, she must seduce Earth’s top general. It’s the only way to save her planet.

Jon, an Earthling, fights in the jungles of Bahay. The blood flows. The bombs fall. As he kills, as he watches friends die, Jon fears for his sanity. He faces a terrible choice. Dare he help Maria? To end this war, would he betray his own people?

There are terrible dilemmas in war. There are sacrifices that break the heart. That shatter the soul. Jon and Maria can change the flow of history. They can save millions of lives. But the cost might be too great to bear. 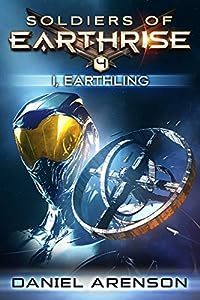 I, Earthling (Soldiers of Earthrise Book 4)
by Daniel Arenson

The war roars toward its bloody crescendo.

Armies muster for the final battle.

On one side fights Earth. Mighty. Wealthy. The center of an empire. On the other side: Bahay. A humble planet. A backwater. A world whose people will never surrender.

Jon and Maria fight on opposite sides. But to end the violence, they must work together. The very fate of humanity depends on it.

Yet the fires burn so hot. The hatred runs so deep. As the climactic battle flares, as the bombs fall and the cannons boom, can Jon and Maria survive? Or will this war rip them apart? 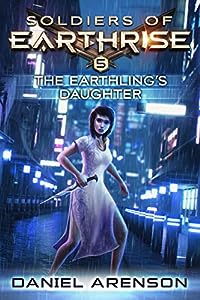 The world of Bahay, once a jewel of the galaxy, smolders after a devastating war.

The survivors rummage through the charred remains. The dead litter the killing fields. The crows feast. And from the ashes, new evil rises.

He appears as an ancient man, clad in black robes, an inverted cross hanging from his neck. His inquisitors spread across the planet. His tyranny crushes all hope.

Maria de la Cruz is a war heroine. She has fought for Bahay in merciless jungles and neon slums. Yet now she faces her most terrifying foe.

To defeat this mysterious despot, Maria must abandon all she has ever known. She must travel deeper than ever into the wilderness of her world. She must uncover the darkest secrets of Bahay… or the oceans will run red with blood.