Glitter Is The Answer!

I know they say it’s too early, but I want pumpkins. I also want a few of those huge chrysanthemums that they have at Costco. If I buy them now I will certainly kill them before Thanksgiving, but I have a tiny bit of hope that I won’t. I mean… I most likely will, but a girl can dream. I really love that you can mix a lot of Halloween decorations with Thanksgiving decorations. Things like Fall leaves and pumpkins. I feel like I am really getting a great bang for my buck with those two holidays. Sometimes I feel like Christmas is being a bit of a jerk by making it’s decorations pretty exclusive to it’s own Holiday. The movie The Nightmare Before Christmas is a nice way to bridge the gap, but that’s about it. Maybe if I put a little glitter on the uncarved pumpkins this year I can fake it a bit. I’m going to need a lot of glitter. 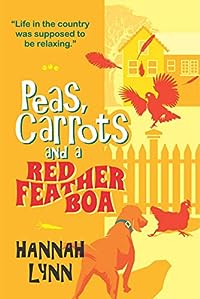 Peas, Carrots and a Red Feather Boa (The Peas and Carrots Series Book 2)
by Hannah Lynn

Life in the country was supposed to be relaxing

Eric Sibley’s new life in the sleepy riverside village of Burlam is going pretty well… except for the fact his new house is falling down around his ears, he has committed himself to preparing a lavish Christmas Day feast for the extend family, his wife is stressed out and overworked, his new allotment neighbour is crazy and, if that wasn’t enough, his mother-in-law has come to stay. Apart from that, it is all going brilliantly.

Following on from Peas, Carrots and an Aston Martin, once again Eric Sibley and his family navigate their way through the trials and tribulations of everyday life. With the edition of some wonderful new faces, get ready to be swept up in a whirlwind of uninspiring leeks, troublesome chickens, inappropriate plumbers and various sinister interlopers, and they are all hell-bent on turning Eric’s life upside down. 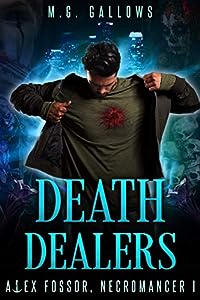 “Don’t dawdle, Alex. My Keepers and I will be searching for that body. If we find it, you’ll know.” Sheriff Agni put a fist over his chest and splayed out his fingers. “Boom.”

A year after a nasty breakup and a big move, Alex Fossor feels like he’s finally getting his life together. Then he gets framed for murder and the Rimbault Society — mages who secretly run the world — drag him before North America’s Archmage. The only thing that stalls Alex’s execution is the same evidence that could damn him, when the victim’s body walks out of the morgue and disappears.

Reviled for his death magic, Alex knows he’ll have to prove his own innocence. But the mundane, the magical, the living and the dead are on his case. A beautiful stranger knows who the real culprit could be, but can Alex trust her to have his back? With time running out, Alex discovers a sinister plot to use arcane drugs to harvest the city’s addicts. He’ll have to embrace everything that makes him a monster in the eyes of the law, before a hex on his heart burns him to ash. 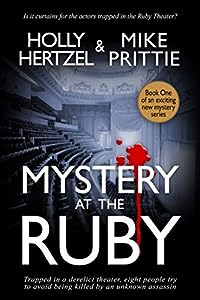 Mystery at the Ruby
by Holly Hertzel Mike Prittie

Trapped in a derelict theater, eight people try to find their way out before they meet their doom! Meet Penelope Moreau, the grand dame of Seattle theater. And Fox Flaherty, with leading man good looks and a chip on his shoulder. Then there’s beautiful Daisy Harlow, student of all things cinema. Joined by other artists, thespians, and performers at the Ruby Theater in Seattle, all are hoping to advance their careers under the leadership of the famed director Mortimer Sterling. They meet up at the fabled Theater, never expecting to be targets of a deranged killer. An intriguing, exciting mix of escape room and Agatha Christie, with a touch of Shakespeare, Mystery at the Ruby will have you on the edge of your seat. 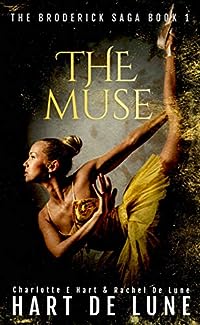 Cold, egotistical and a Foxton.
He tore my final performance to shreds with his pen, and embarrassed me for all the world to see.
But hate wasn’t what I felt for Scott Foxton when he touched me. Enemy wasn’t what I thought when he rescued me either.
I got lost in dreams and hope, and ignored the threats that would follow my own deceit.
For once in my life, family loyalty could be damned.
But then I saw the painting.
And now I can’t lie anymore.
The man I shouldn’t want is the one that holds my heart.
I just have to trust that he’ll still believe me when he knows the truth about Persephone Broderick.

In this book we focus on Mushrooms. Mushroom Recipes is a complete set of simple but very unique Mushroom cooking ideas. You will find that even though the recipes are simple, the tastes are quite amazing.

Here is a Preview of the Mushroom Recipes You Will Learn: