The Earth Warden Saga by Tyler Aston is the perfect blend of science, fantasy and good old fashioned action. Fans of Firefly and The Expanse will love this fast-paced and action-packed space opera. So buckle up and brace yourself for terrifying, hilarious and fantastical fun. 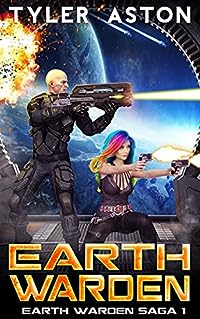 The Wardens are our planet’s last line of defense.
Powerful warriors, they stand firm against every threat humanity faces.
It’s more than just a career – it’s a sacred calling…
But it comes with a very short life expectancy.

Lord Kreon, Warden of the First Circle, has a problem.
He’s been forced to kill another apprentice, and he’s rapidly running out of candidates. In fact, there is precisely one left…

Raised on modern-day Earth, Tristan knows nothing of the wider galaxy.
He’s been fighting just to survive, ever since the day his dad left for work – and never came home.
He’s always believed that there was more to life. That he could make a difference.
He’s about to discover that what you don’t know can not only hurt you, it can tear your world apart!

Join Tris, as he’s catapulted into a universe beyond his wildest imagination. Where bizarre aliens threaten mankind, genetically engineered assassins lurk in the shadows, and the mysterious Wardens live by an ancient code…
Of sacrifice. 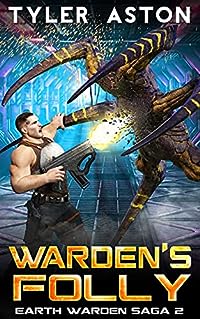 Lord Anakreon, Warden of the First Circle, has lost a weapon.

Not just any weapon; the Planet Forge is an ancient alien artefact with the power to create worlds…
Or to end them.

His arch-rival, the traitor Lord Demios, is hell-bent on conquering Earth. He aims to tear the planet to pieces, and sell off the human population for spare parts. As sworn guardians of Earth, Anakreon and his hand-picked crew of fighters must stop him, no matter how terrible the cost. But that is not their only challenge.

Because there are far, far worse things than rogue Wardens in the galaxy.
As the people on the sleepy planet of Arixia are about to find out…

Jump on board for a high-octane adventure full of epic space battles, deadly robots and genetically engineered assassins! You’ll love Warden’s Folly because it blends the humor of Firefly with the non-stop action of M.R. Forbes. Grab your copy today!