The Sovereigns of the Collapse Series by Malcolm J. Wardlaw

Sovereigns of the Collapse by Malcolm J. Wardlaw, is a five-part dystopian saga for those curious about the coming dark age. The books flow through ongoing action and therefore have ‘to be continued’ style endings (except the final one obviously). The series contains adult themes and is not recommended for the under-16s. Enjoy!

Death by Decent Society (Sovereigns of the Collapse Book 1)
by Malcolm J. Wardlaw

Since the financial Armageddon, it’s been guns, gold and lots of slaves.

It is 2106. Seventy years have passed since our times collapsed in complete banking disaster. Overpopulation, mass extinctions and climate change are problems no longer. The world is Paradise — for a few.

Behind the palaces and uniforms, barbarity is as routine as it is unspoken.

Ordinary people struggle to bring up children and pay the bills. The crust of normality is fragile. When misfortune strikes, lives disintegrate.

Death by Decent Society is the story of three talented people who were well on their way to the top — and then suddenly they were not.

Donald Aldingford, star barrister. His brother Lawrence Aldingford, fast-tracked officer. His fiancée Sarah-Kelly Newman, revolutionary cell leader. They hate the rule of guns and gold and won’t tolerate being pawns in a big-shots’ board game.

These pawns are going to fight back if it means bloody revolution. 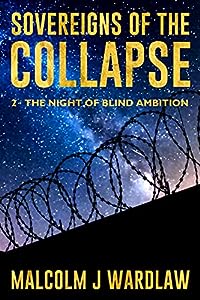 The Night of Blind Ambition (Sovereigns of the Collapse Book 2)
by Malcolm J. Wardlaw

Escape to freedom or escape to hell?

Lawrence and Pezzini must escape the Value System of Nightminster. Otherwise, they’ll be killed — very nastily — by the marsh people.

But the outside world is changing.

The National Party has launched the Atrocity Commission to track down glory criminals. Sarah-Kelly Newman is at its heart. Her enquiries are steadily exposing a brutal world that has existed for decades.

The guilty will not tolerate this insolence. They are going to act — viciously.

People who are honest, decent and true have no chance.

The Night of Blind Ambition is the second book in the Sovereigns of the Collapse dystopian saga. 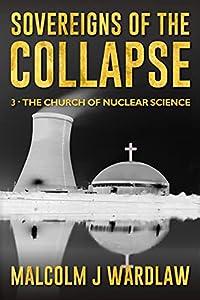 The Church of Nuclear Science (Sovereigns of the Collapse Book 3)
by Malcolm J. Wardlaw

Not all that glitters is gold. Sometimes it’s a nuclear trap.

The most forceful individuals will not be cowed by the Republic of the New Nation. Donald aims to defeat the fanatics of the National Party. Lawrence has sworn to destroy the Value System of Nightminster. Sarah-Kelly is determined to expose the crimes of the glory trusts. All three walk straight into a trap laid by the great sovereign Tom Krossington.

After which everyone — including Tom Krossington — has to find new ways of staying alive. Despite their mutual loathing, Donald and Lawrence embark on a long and dangerous winter journey hoping to gain asylum with the Church of Nuclear Science. On the way, they discover not all that glitters is gold.

The Church of Nuclear Science is the third book of the Sovereigns of the Collapse dystopian thriller series. 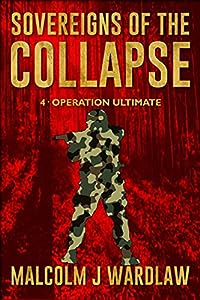 The truth of the Value System is too outrageous to believe.

Lawrence has won the support of the Shellingfield clan to attack the Value System. But first, he has to prove to the world it’s as evil as he claims. He must get living evidence.

As the first tribune of the Protectorate, Nightminster has tasted power. It’s a taste he likes. He has every intention of getting more of it. His alliance with the Krossington clan makes him a formidable force. He’s going to purge the Value System and have Bishop Donald Aldingford indicted for the murder of Julius Shellingfield. He’ll win the support of the glory trusts by putting Sarah-Kelly Newman on trial for mass-murder.

With no enemies left, what can stop him achieving supreme power?

Operation Ultimate is the fourth part of the Sovereigns of the Collapse dystopian saga. 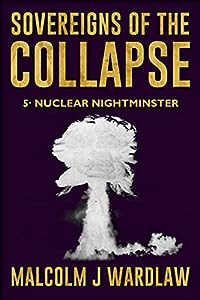 The more Nightminster is threatened, the more dangerous he becomes. He has proved to be a man of indefatigable will and astounding gall; again and again he has thwarted efforts to defeat him. He still believes he can win — with good reason.

Lawrence has been shunned by the Shellingfields, despite great accomplishments at the Value System. For him, life and death are separated by a single sheet of paper.

Sarah-Kelly still awaits her fate in the Basement of Euston depot. For her, life is death, it’s just a matter of time.

The great enemies manoeuvre for position, confident of their advantages. Each has a secret weapon. The question is, which weapon will prove lethal?

Nuclear Nightminster is the concluding part of the Sovereigns of the Collapse dystopian saga.