Three Thousand Years In The Making

Check out these two great fantasy series by author P.E. Padilla. Escape today into a world filled with action and adventure like no other. Enjoy! 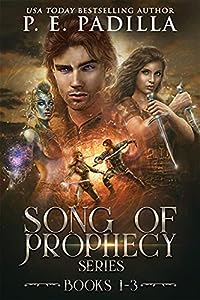 Outcast, hero of prophecy, or both?

Aeden Tannoch hasn’t had an easy life. Cast from his clan and beaten nearly to death by the people he loved, all he ever wanted was to make his family proud. And now the dark creatures have come, apparently searching him out to finish him off for good.

If all that wasn’t enough, Aeden learns of the Song of Prophecy, a three-thousand-year-old prediction that there would come a warrior to save the world from invading monsters. Fingers are pointing at him, but how can he be the one when he couldn’t even pass the trials in his own clan?

The Song of Prophecy Box Set includes books one through three of the internationally bestselling Song of Prophecy series. Get them all in one place so you won’t miss a moment of the action. 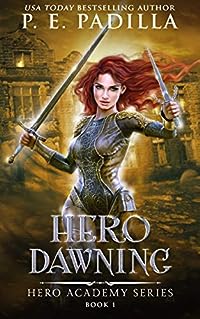 The beginning of the end…

There are prophecies and there is the Prophecy.

The Bhavisyaganant, the Song of Prophecy, foretells a time of darkness, of creatures from another world invading Dizhelim to destroy all life and light.

To combat this evil, the Great Prophet Tsosin Ruus built the Hero Academy to train the Malatirsay, the hero who is the only means to defeat the darkness, prophesied to appear at the proper time.

But when is the time and who will it be?

Marla Shrike is the star student in the famed Hero Academy, already having mastered more schools than anyone in history. The indeterminate future isn’t on Marla’s mind, though, not with the Academy in turmoil.

One of the masters has been murdered on the Academy grounds, something that has never occurred. This one action begins a tempest of events that will change not only everything Marla has ever known, but the entire world. She’ll need every bit of skill and knowledge she’s gained from her instruction to survive it.

Maybe even that won’t be enough.

Hero Dawning is the first of the Hero Academy books, a truly epic fantasy series that continues the story from the Song of Prophecy series. Get it now and be part of the action three thousand years in the making. 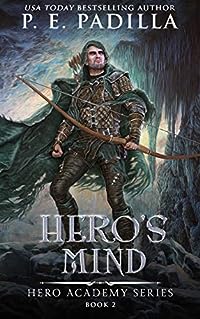 The traitorous Hero Academy graduates have been defeated. The heroes have returned to the Academy to regroup. But there are still thousands of animaru out there, dark monsters whose aim is to end all life on Dizhelim.

What will Aeden and the others do now?

Fahtin Achaya’s burgeoning seeress powers have given her visions of other dark dangers and of a place to where the heroes have to travel. The threat is unclear but one thing is certain: of all of the companions of the Malatirsay, the archer Tere Chizzit must go or the entire mission is doomed.

Meanwhile, Tere is feeling his age and the loss of his magical sight keenly. He wants to help but feels worthless. Never one to let his friends down, however, he agrees to search for the hidden menace of the visions.

He’s got a bad feeling about this trip. Might it be his last?

Click now to get Hero’s Mind, the second exciting book in the Hero Academy series. 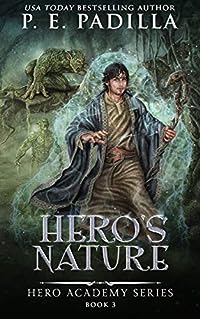 Don’t mess with Mother Nature… or her priest!

In the midst of the chaos and danger of the Time of Darkness, Urun Chinowa has been having a rough time. He’s had his share of attacks and close calls, but the worst of all his experiences is the lost communication with his goddess, Osulin.

What’s a nature priest to do?

When he receives an urgent sending from the goddess, Urun immediately prepares to go unaided to help her. But his friends, including the hero who was formerly known as Erent Caahs, pledge their support and accompany him while others of the group head off for other urgent missions.

The group of heroes splits up, Urun and his few companions heading toward where Osulin pointed him: the Mellafond, a dangerous and enigmatic swamp he had no desire to ever visit.

The young priest knows that if something could overpower a goddess, he has little chance to defeat it, but he must make the attempt. Maybe the small group of heroes can pull off another victory against the dark forces challenging the world.

If not, the battle with the animaru will have to proceed with fewer heroes.

Grab your copy today of the third exciting book in the Hero Academy series. The danger is increasing, mysteries are multiplying, and the small group of heroes are heading toward the climax prophesied thousands of years before. 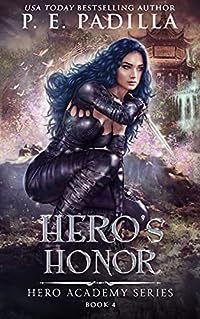 The emperor of Shinyan had declared war on the island nation of Teroshi. Worse, he has made a deal with the animaru, the dark monsters invading the world to end all life.

Given the mission to go to her father’s homeland on behalf of the Hero Academy, Jia is a little wary. In Shinyan, honor is everything, and she is a former assassin for hire.

Not the most honorable of professions.

Along with a few of her friends, Jia must not only stop a war, but prevent a valuable ally from adding their military might to the very creatures who will destroy Dizhelim. All while wrestling with her own inner demons and contending with treachery and intrigue.

Some days, it’s just not worth trying to save the world.

Book four in the Hero Academy series brings us to a new nation and new challenges. Join Jia in trials that transcend time itself, with the potential to refine her… or destroy her.