A centuries-old mystery. A long-lost chronicle. An impossible cipher that archaeologist Angela Hunter must solve before evil reawakens. If you enjoy action-packed mysteries about ancient civilizations, you’ll love this adventure that takes you on a journey in two timelines: the Age of the Aztecs and a present-day dig site with archaeologist Angela Hunter. Discover what might have happened to the famous Cahokians… 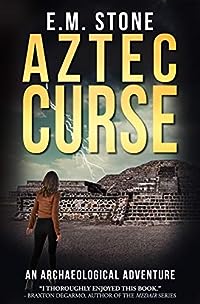 Over 700 years ago, a thriving Native American civilization suddenly vanished, burying with it one of archaeology’s greatest mysteries. The secret remained hidden — until now.

Linguistics expert Dr. Angela Hunter has discovered a primitive codex, yet the Cahokian Mound Builders didn’t have a written language. As she deciphers the foreign symbols, Angela unravels clues that connect a mystical ritual and a vindictive curse. Determined to prevent her bitter rival from sabotaging her find, she has only days to complete the translation from centuries past…

At the height of the Aztec Empire, 12-year-old Tototl escapes a vengeful shaman to find a new life in the north. But something has followed him. As he struggles to conquer the destructive force, he’s desperate to warn future generations about the danger.

With an ancient evil threatening to emerge, Angela is in a race against time to piece together the puzzle before civilization as she knows it disappears forever.