I SHALL RETURN WITH WINTER by CF WELBURN

Bold and raw, CF Welburn’s “I Shall Return With Winter,” is a cleaver take on survival that repeatedly twists the revenge saga into increasingly difficult tasks.. Enjoy! 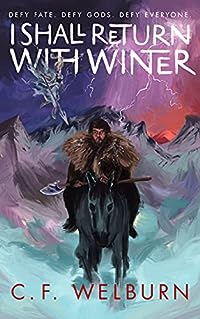 I SHALL RETURN WITH WINTER
by CF WELBURN

When Oben’s farm is sacked by marauding Skalgs, he embarks on a deadly quest for revenge, leaving pious Edale behind to enter the godless north.

But Skaligar is a strange place, and his enemies are full of surprises, which will push his endurance and his faith to their limits. He finds himself an unwitting pawn in their ancient prophecy; one which tells of a Conduit who will deliver Edale into their hands.

If Oben is to see his homeland again, he must not only survive, he must prove the prophecy wrong, whilst exacting vengeance on those to whom he grows ever more bound.