The Drinnglennin Chronicles by K.C. Julius

Step into an epic world where dragons and mortals bind. The Drinnglennin Chronicles by K.C. Julius is classic high fantasy, filled with sword and sorcery, intrigue, and betrayal. These well-plotted and smartly paced fantasy novels are sure to keep readers turning pages until the very end. Enjoy! 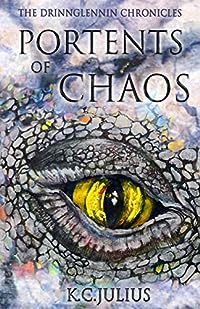 Portents of Chaos (The Drinnglennin Chronicles Book 1)
by K.C. Julius

Step into an epic world of sword and sorcery, intrigue and betrayal…
The realm of Drinnglennin hangs poised on the cusp of chaos, for Urlion Konigur, the High King, is dying and has yet to name an heir. Rumors abound that the Helgrins, Drinnglennin’s bitterest foes, are preparing their longboats to raid the Isle’s shores, while the roving å Livåri folk, for whom the island kingdom is the last sanctuary, are strangely disappearing. And in distant Belestar, the fabled dragons are stirring from their self-imposed exile…

Drinnglennin’s hopes lie with the wizard Morgan, who must gather together and safeguard the king’s possible heirs, all three of whom are coming of age. Yet a dangerously powerful house seeks the succession for one of their own, even if it means disrupting the fragile peace of the realm.

One thing is certain: whoever next sits on the Einhorn Throne will determine the fate not only of Drinnglennin, but of all who dwell in the Known World. 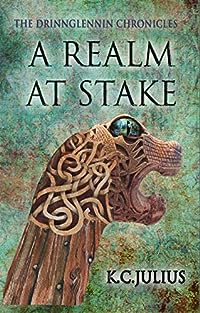 A Realm at Stake (The Drinnglennin Chronicles Book 2)
by K.C. Julius

Dark days lie ahead for Drinnglennin… An ominous darkness is gathering over the Known World, and none will escape its long shadow.
In Helgrinia, Fynn, the bastard son of Aetheor Yarl, finds his position ever more precarious — and when tragedy strikes on Midsommer’s Eve, he is compelled to take a perilous vow. Across the Erolin Sea, Master Morgan travels the length of the Isle determined to uncover the roots of King Urlion’s illness. The treachery he discovers sets him on an even more dangerous course. In the elven sanctuary of Mithralyn, Whit and Halla’s mutual enmity grows, and an ill-thought out decision by one of the cousins spells calamity for the other. Maura and Leif, summoned to Drinnkastel by the ailing High King and presented as royal relatives, become embroiled in the intrigue and jealousies of the Konigur court. Maura’s fears of discovery are compounded when she learns that Borne Braxton, who knows her true identity, is also in the capital.

All the while, deep in the Lost Lands, Lazdac Strigori stirs his cauldron of chaos, as the bitter seeds he has planted bear their baneful fruit. A day of reckoning is fast approaching for those he deems have denied him his rightful heritage, which bodes ill for all.

Bindings of Peril (The Drinnglennin Chronicles Book 3)
by K.C. Julius

Conflicts flare throughout the Known World, and an entire continent teeters on the precipice of war… In this third book of The Drinnglennin Chronicles, fate has conspired to separate our heroes — whether wizard or dragonfast, noble or commoner — and send them on their own separate paths, where the trials they face and choices they make will shape the fate of all who dwell in the Known World. Leif and Rhiandra journey to Belestar in the far north, on a perilous mission with no guarantee of success. In Drinnkastel, Maura is swept up in preparations for her impending wedding to the newly proclaimed High King, Roth Nelvor, but doubts gnaw at her as a darker side to her fiancé’s nature begins to emerge. Fynn lands on the Isle a prisoner, and is there separated from Teca, the last remaining connection to his life in Helgrinia. And Morgan, having honored his oath to the late High King, returns to Mithralyn — only to be confronted by his young charge, Whit, who upon learning the terrible truth about the master wizard’s powers, departs the elven realm to determine his own course. Meanwhile, across the Erolin Sea, both Borne and Halla’s prowess on the field of battle bring them to the attention of their respective commanders, Latour and Nicu, who will play decisive roles in shaping their destinies… in very different ways.

But none of them have yet begun to comprehend the danger looming in the Lost Lands, where Lazdac Strigori draws ever closer to exacting his vengeance on mankind and dragons alike. 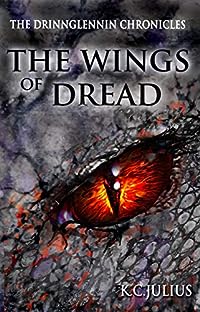 The Wings of Dread (The Drinnglennin Chronicles Book 4)
by K.C. Julius

“When dragons return to Drinnglennin’s skies,
Her darkest mage again shall rise
and thus unleash the wings of dread… ”

Lazdac’s time has come. The dark wizard is once more at the height of his power, and his drakdaemons are ready to impose his will on the Known World. Yet those who would lead the battle against Lazdac and his army are scattered and unprepared, and failure by even one could mean failure for all.

Master Morgan, who once defeated Lazdac, is in no position to do so now. He has been charged with the murder of the former High King, Urlion Konigur, and is held prisoner in Drinnkastel by Urlion’s successor, Roth Nelvor.

Whit of Cardenstowe, Morgan’s one-time protégé, must flee the new king’s silvercloaks to avoid the same fate. He sets off with Fynn, the true heir to the Einhorn Throne, on a perilous journey to Langmerdor in search of evidence to confirm the young Helgrin-born lad’s parentage — during which they must both come to terms with a role for which Fynn has no desire or training.

Maura and Ilyria, driven from the Isle by Roth Nelvor’s attack on the dragon, fly to the Continent in search of sanctuary. But as Ilyria investigates the plans of her treacherous brothers, Maura finds that she has merely traded one dangerous courtly intrigue for another.

In Olquaria, Borne strives to make a fresh start serving as Gralian herald in the exotic court of Zlatan Basileus, but his presence is seen by some as foreign intrusion, and is bitterly resented by the leader of the Basileus’s mighty Companions.

And in the Lost Lands, Halla battles against despair as she desperately seeks a means of escape from the vaar, who has made no secret of his plan to use her unborn child to evil purpose.

In this dazzling conclusion to The Drinnglennin Chronicles, the dark forces threatening this vividly rendered world will pit ruthless ambition against the unmeasured courage of those who stand against them, sweeping all toward a dramatic climax none could have foretold.