The Monsters Haven’t Left Just Yet

Former writer for the TV show American Dad Carlo Hart, wrote these two frighteningly great horror stories while in a cabin at the top of Frazier Mountain. There are lots of rumors of strange paranormal activity going on up there, and he has seen some himself. The mountain is a great place for writing horror. Enjoy! 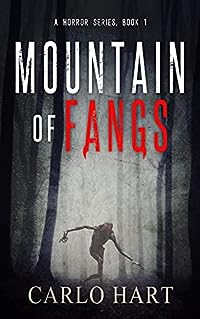 Mountain Of Fangs
by Carlo Hart

A brimming sense of despair. A hotbed of horrific beasts. Who will survive the hellstorm?

Frazier Mountain, California. Kevin Murphy can’t seem to catch a break. Fleeing to an imposing pine-forested peak after a series of Hollywood fiascos, the beaten-down writer fears the gorgeous woman on his arm won’t stick around if he doesn’t find success soon. But their idyllic cabin in the woods becomes a house of horrors when he discovers the area is secretly a haven for disturbing creatures and deadly vampires.

Desperate to show he’s strong, Kevin and his girlfriend rush to assemble a monster-fighting force. But all his efforts might be for naught in the face of their maniac neighbor’s plan to use a legendary spellbook to unleash all-out annihilation.

Can the troubled wordsmith rebuff a bloody invasion without becoming fiend fodder?

Mountain Of Fangs is the pulse-throttling first book in the Mountain Of Fangs horror series. If you like creepy locales, inhuman threats, and the clash of swords and gunfire, then you’ll love Carlo Hart’s uneasy climb. 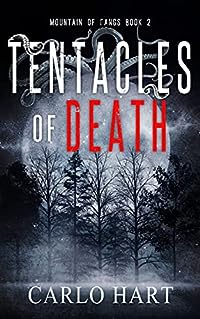 Tentacles Of Death (Mountain Of Fangs Book 2)
by Carlo Hart

A black witch is terrorizing Frazier Mountain with demonic magic. Can Kevin and Faith stop her before she opens a portal to an invasion of evil?

Kevin Murphy and Faith the vampire, are excited to start their new paranormal investigation business. When one of their clients is ripped to pieces, the police book them as the primary suspects. But they can’t stop the wave of killings from behind bars.

Madison is not there to rescue them this time, because she is secretly training with the space force. The first hotel on the moon is now accepting guests. Unfortunately, one of them has been brutally murdered. Can she fight a moon monster if her powers have disappeared?

Back on the mountain, new fire-breathing creatures are unleashed on the local high school. Is a building full of children worth dying over? What happens to the town if the fiend fighters are sacrificed?

Tentacles Of Death is the petrifying second book in the Mountain Of Fangs horror series, that has been responsible for so many sleepless nights. If you like space creatures, demons, and epic witch battles, then you will love Carlo Hart’s terrifying tale.

Buy Tentacles Of Death and get your ticket to the first hotel on the moon. Killer monsters are included, free of charge…