I have a long checklist of terrible and boring chores I have to do, and I am doing my best to get them done before the new year. I have this delutional notion that if I just get them done I will start the new year fresh and free of worries. We all know that’s not going to happen. As soon as I get one chore done, a new one pops up. So really I shouldn’t do any chores. What episode of The Witcher am I on? 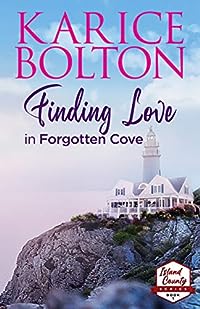 Tori Aickens understands more than most what it feels like to lose the ones you love, but she also understands how to survive that kind of pain by leaving it all behind and never looking back. Unfortunately, while she’s busy never looking back, she walks straight ahead to find her fiancé cheating on her with a grin on his face.

It isn’t until her father passes away, that Tori decides to return to Fireweed Island for the summer. Coming back to a place where ghosts lurk in even the happiest of memories makes her face the heartache of her past she’s done so well at leaving behind. It isn’t until Gabby introduces Mason Rhodes to her that she realizes kindness can exist in this overly brutal thing called life, and maybe not all men are meant to self-destruct, or she’s just been sniffing in too much ocean air.

Either way, spending time with Mason on Fireweed Island leaves Tori questioning if the carefully constructed life she left behind in New York is one she even wants any longer. Mason is determined to break down Tori’s barriers, but she’s not sure she’s strong enough to let go of her past and imagine a future that risks her heart getting broken again, and she wonders if there’s such a thing as the right love at the wrong time…

Fans of the Beyond Love Series will enjoy seeing old friends and reading about fresh characters in this carefully woven tale of love, heartache, and new beginnings. 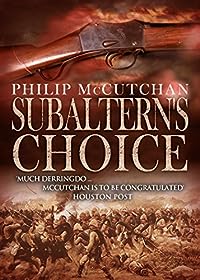 The men of the 114th Queen’s Own Royal Strathspeys are posted in Peshawar, an outpost of the British Raj near the North-West Frontier.

But word comes that trouble is brewing in the region, and that the princeling Jahangir Khan – who has the support of the British – may need the army’s assistance.

The pressure on the brave Strasthspeys begins to mount after a fact-finding patrol led by zealous new subaltern Hamish Dewar goes disastrously wrong: he is the only survivor.

Now Captain James Ogilvie’s regiment has a clear duty to defend their honour and protect Jahangir Khan by marching to the nearest city of Kalandabad.

There they meet more than they bargained for: angry natives and what may be even worse: a city riddled with cholera.

As the army’s leaders one by one begin to fall prey to the dread disease, reinforcements fail to arrive and the situation becomes ever more desperate, it is left to the cool head and bravery of Ogilvie to try to steer the Strathspeys through what is looking like their darkest hour.

He is not helped by hot-headed Hamish Dewar, whose foolhardiness and lack of diplomacy only make things worse.

Then Dewar commits an action so foolish, he is forced into making the ultimate Subaltern’s Choice. 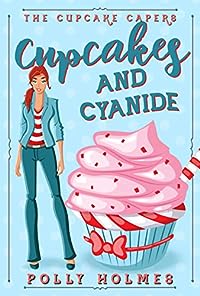 Cupcakes and Cyanide (The Cupcake Capers Book 1)
by Polly Holmes

If you like quirky loveable characters, engaging reads with a dash of humour and mystery, then you’ll love Polly Holmes’ Cupcakes and Cyanide book.

Welcome to Ashton Point. One sweet taste could be her last.

Charlotte McCorrson has spent her entire life building her business, CC’s Simply Cupcakes. The town of Ashton Point is her home and she’s garnered a reputation of stellar service and delightful pastries, one nibble at a time. But everything isn’t as sweet in the sleepy, coastal town as Charlotte would like to think. She is in for a rude awakening and no amount of sugar will make this medicine go down any smoother.

After catering a large town-wide event, Ashton Point’s morning newspaper fills Charlotte McCorrson with an icy sense of dread. The headlines scream Cupcake Killer! and put the blame squarely on CC’s Simply Cupcakes. When bodies begin to pile up behind her confectionary goodies, Charlotte must prove that while her cupcakes are delicious, they aren’t literally to die for — before she ends up in jail for a crime she didn’t commit.

This is Book 1 in The Cupcake Capers Series and may contain elements of humour, drama and danger. However, it will definitely not contain any of the following potentially lethal substances:
Swearing or profanity.
Gore or graphic scenes.
Cliff-hangers or unsolved endings. 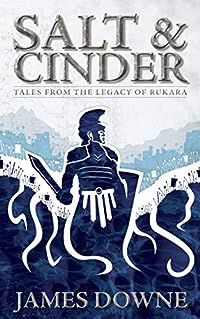 Salt & Cinder: Tales from the Legacy of Rukara
by James Downe

Salt & Cinder: Tales from the Legacy of Rukara

For nearly four hundred years the Empire of Mirias Deil has stood – indomitable and undefeated. Built on the ashes of war, the empire’s legions are legendary, its soldiers resolute in defence of their homeland. While no rival nation can match the Miriai on the field of battle, sometimes the worst enemies don’t come from without – but within.

On the eastern plains, a caravan captain fights to get his daughter to safety. In the imperial city of Soften, a scholar risks both career and reputation to study the mysterious radiants looming above. Deep in the Miriai jungle, a band of mercenaries is willing to sacrifice everything to save a small town from a demonic horde. From the deepest jungle to highest peak, whispers of rebellion hang on the lips of every civilian, soldier, pirate, or scholar to call the empire home.

Within this volume are ten tales of betrayal, heartache, sacrifice, and war.
Within are the tales of the Legacy of Rukara. 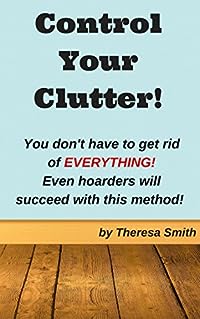 Control Your Clutter!: You don’t have to get rid of EVERYTHING! Even hoarders will succeed with this method!
by Theresa Smith

“Control Your Clutter!” is a book that is going to show you how to gain control of the clutter in your house so you can reclaim a calm, stress-free life. The method in this book works even if you are a hoarder! For the person with just a little clutter to an all out pack rat who hasn’t thrown anything away for thirty years, this book has the solution to your problem.

Do you hide and stay away from the windows when someone is knocking at your door? Do you have to clear away a place to sit when your family comes to visit? Even if the last time you saw your floor was ten years ago, this book will work for you!

Even the person who faces eviction due to their hoarding ways will be able to follow these steps and dig themselves out of their situation.

In this book, I am going to give instructions about how to deal with your clutter. Surprisingly, I am not going to tell you to get rid of everything. I come from a very poor background, and I must tell you that I understand hanging on to something in case you need it again. After all, it doesn’t make sense to throw something out and then turn around and buy it again the next time you need it.

I am going to ask you to make some hard decisions about whether or not you really need each item you come across. As usual, you will either donate the stuff you don’t need, sell it, or throw it in the trash if it has no value. But I am going to give you the option to organize the things you can’t part with so that they are no longer clutter even if you keep them.

This book breaks all of the barriers a person has to getting their life back in order. Because I allow you to choose to keep your possessions, it helps take away the fear of losing everything. It will help you be able to let go of more things during the process and then rationalize getting rid of more things you saved after a generous period of time. It is similar to pulling the band-aid off slowly.

Whatever your relationship is with your possessions, this book will be able to help you reclaim your home and your life! If you don’t read this book now, where will you be next week, next month or next year? I promise this method is the least painful way I know to gain control of your clutter.