The Alicia Friend Mystery Series by A. D. Davies

The Alicia Friend Mystery Series by A. D. Davies is an intriguing mix of police procedural and serial killer thriller, that will tease, involve and unnerve you. Filled with twists and turns this series is just what lovers of mystery novels are looking for. Enjoy! 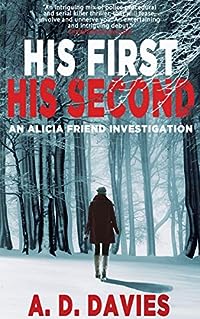 His First His Second (Alicia Friend Book 1)
by A. D. Davies

In the midst of a cold British winter, a killer takes his third victim.

A unique female detective is tasked with finding her. She has only days.

Now, the victim’s father calls upon skills honed in a dark past and launches his own hunt.

Detective Sergeant Alicia Friend is not your average copper. She’s nice. Too nice, sometimes. And maybe, if pushed, she might admit she keeps her unorthodox, too-happy personality front and centre to fend off the darkness of her caseload. Fortunately, her fierce intelligence and incredible success rate mean senior officers overlook her quirks which often clash with the seriousness of the job.

Parachuted in to bring an end to a chilling kidnap-murder spree, Alicia has less than a week to win over her new colleagues, get her inspector to trust her, then chip away the secrets of a high-society family, and finally uncover the killer’s real objective.

But Richard, the father of the latest victim, believes the police are not moving quickly enough. As his secret actions hinder the case, and a vengeance-fuelled private investigator from the States adds more questions than answers, the clock is ticking until another innocent person dies.

And Alicia will be forced into choices that will impact the rest of her life. 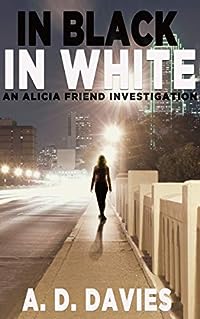 In Black In White (Alicia Friend Book 2)
by A. D. Davies

Detective Sergeant Alicia Friend: cop, analyst, cutie-pie. Obsessed.
Alicia knows she can be irritating to have around at first but, when given a chance, all her colleagues fall in love with her. She can’t explain it, but it’s how she works, how she gets her best results.
And it is exactly how she must work when a British diplomat is murdered on US soil, and the UK Ambassador orders her to observe the FBI’s investigation. Soon, the murders expand to encompass a wider victim profile, each confessing their politically motivated lies on camera, and Alicia shows why her superiors overlook her quirks, and consider her one of the best minds in her field. Drafting in her old partner, Alicia imposes her personality on the investigation, and shifts the focus from a politically charged arena to the madness of a psychopath who cannot seem to stop. In Black In White is a fast paced serial killer thriller that reunites popular characters from the first Alicia Friend book, His First His Second (which can be read for FREE), and introduces new ones to this very unusual British detective. 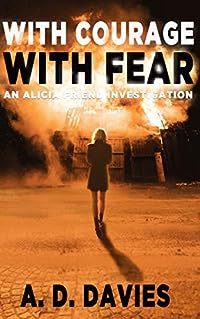 With Courage With Fear (Alicia Friend Book 3)
by A. D. Davies

Detective Sergeant Alicia Friend: perky, insubordinate, utterly brilliant.
Since returning from assignment in America, DS Alicia Friend has been grounded at a desk, her new boss unwilling to risk her in the field. But when Alicia’s former partner requests her input, the SCA cannot refuse. It only involves interviewing a young terror suspect, after all. What can go wrong? But Alicia backs her partner’s suspicions and links the crime to a seemingly unconnected incident. Then a third attack occurs, and there is no denying it: someone is coordinating these vicious incidents, and the endgame is building. Back in full flow, the sometimes-annoyingly-perky detective summons all her brain power to push the investigation toward a seemingly benign cult, hindered at every turn by the group’s lawyer, by the detective seeking to replace her, and by a hierarchy as interested in politics as they are in catching the killer. With Courage With Fear sees DS Alicia Friend face her most devious serial killer yet – one who may be even smarter than her.

A Friend In Spirit (Alicia Friend Book 4)
by A. D. Davies

A dead grandfather. An impossible witness. A cover up that may set a killer free.

The victim:
On a wet winter’s evening in a northern British city, Karen and Jerzy Krasowski attend a psychic reading in a pub. For fun. But when the psychic tells Karen something awful has happened, the couple flee back to their home to make a grisly discovery: Karen’s father has been brutally murdered.
The detective:

Detective Sergeant Alicia Friend returns to work, where her interest is piqued by the notion of a psychic witness. Which is impossible, isn’t it? And when the psychic goes missing, Alicia employs her ridiculously perky brilliance to penetrate the network of lies buried just beneath the surface of a successful middle class family.
The politicians:

While DS Friend and DCI Murphy try to solve a murder, an MP caught up in her own scandal is monitoring the case very closely. There doesn’t seem to be a connection between her and the victim, so what is she hiding? And can she derail the case? In Alicia’s first case in many months, she is at first relieved to land what looks like a straightforward murder, but is soon embroiled in an increasing body count, a political coverup, and a web of secrets that might just tear an innocent family apart. 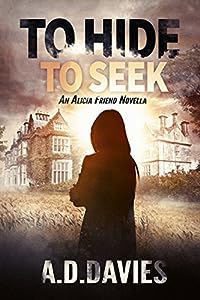 To Hide To Seek (Alicia Friend Book 5)
by A. D. Davies

Freshly promoted to detective inspector, Alicia Friend is yet to unleash her quirky (sometimes irritating) personality on a murder case. That is until her former roommate calls with a plea to insert herself into an investigation.

A high school teacher has been murdered in an English countryside mansion.

In a room locked from the inside.

By one of six people – all of whom might want this troubled individual dead.

Struggling to assert her true, perky persona in an unfamiliar senior role, Detective Inspector Alicia Friend embarks on a new phase in her life by attempting to solve an ingenious murder and fix a friendship damaged by recent changes in her life.