The Runewar Saga, a new epic fantasy series by best-selling author J.D.L. Rosell. It tells the tale of Viking warriors, runic magic, and legendary creatures inspired by Norse mythology. If you love character-driven sword and sorcery, then embark on this journey through the perilous world of Enea. 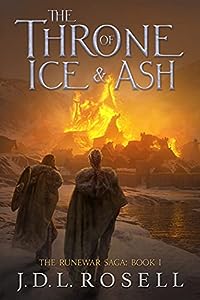 The Throne of Ice and Ash (Book 1 of The Runewar Saga, An Epic Fantasy Series)
by J.D.L. Rosell

A throne in peril. A tragic betrayal. Two heirs struggling to save their land. The prophesied war engulfing the world…

Bjorn, youngest heir to the Mad Jarl of Oakharrow, has always felt more at ease with a quill than a sword. Yet when calamity strikes his family, he draws a blade and leads a company of warriors into the cold mountains in pursuit of a mysterious foe. Though he seeks vengeance, an ancient power stirs within him, and the whispers of prophecy beckon him toward an ominous destiny…
Aelthena, Bjorn’s sister, was born with the aptitude to lead, and she’s eager to prove it. But her society’s rules for women, and her love for her brother, restrain her efforts to command. As she walks the fine line between ambition and virtue, enemies of mankind and myth rally against Oakharrow, and even her allies question her right to rule…

The Runewar is rising — it begins with the fall of a throne. 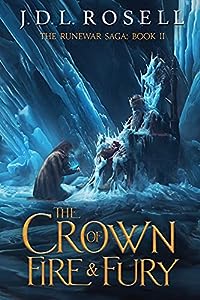 The Crown of Fire and Fury (Book 2 of The Runewar Saga, An Epic Fantasy Series)
by J.D.L. Rosell

A war on two fronts. A fight for a crown. A prophecy coming to pass. The ancient enemies emerging from the shadows…
Oakharrow has been conquered — for now. But Aelthena has never given up easily. Fleeing her city, she goes to the jarls of Baegard, seeking their aid to take back her home. But politics are at play, and Ha-Sypt is on the move. Only one can wear the Iron Circle and lead Baegard’s armies. In determining who will wear the crown, Aelthena must make a choice: do what is best for her nation, or for herself.

Bjorn sets his sights to a greater challenge: the arrival of a prophesied war. Knowing too little of the giant who attacked his home, he and his companions travel to the Inscribed priests to learn more. Among them, Bjorn uncovers ancient secrets and develops his newly discovered magic. But both knowledge and power have a price, and Bjorn will pay in sorrow and blood.

The Runewar has come — monarchs will rise and fall.