In They Will Be Coming for Us by Kim Catanzarite, a young woman’s greatest dreams and darkest nightmares are pivoted against each other in this dynamic sci-fi thriller. Buy They Will Be Coming for Us today and experience this mind-bending tale of love, loss, and the mysteries of the night sky. And don’t miss book two,  Jovian Son, the revealing sequel and conclusion in this two-book sci-fi thriller.

In this gripping sci-fi thriller, Svetlana Peterman has met her soul mate in Andrew Jovian, a young astronomer who works for Starbright International, the aerospace company his wealthy parents own. Once married, they make a home in Kirksberg, Pennsylvania, a small town famous for a UFO sighting that occurred in the 1960s. Svetlana is, for once, truly happy, except that Andrew’s family is strange, and not in a normal-strange kind of way.

Preoccupied with only two things — the night sky and carrying on their family lineage — the Jovians lack social skills and often pry into Svetlana’s personal life. Her intimidating mother-in-law demands she get busy fulfilling her reproductive duty to the family, and Andrew’s eccentric uncle seems to be able to read her mind.

Feeling bullied and wanting a career before motherhood, Svetlana takes precautions but ends up pregnant anyway. But that’s the least of her worries when she discovers the Jovians have a monumental secret that will change her fate (and that of her child’s) forever — a secret so powerful, it could alter the course of mankind. 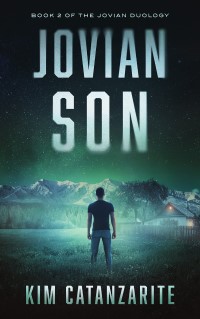 Jovian Son, the sequel to the award-winning They Will Be Coming for Us, is the nail-biting finale in the Jovian Duology.

A mother desperate to keep her child.
A child with the power to change the human race.
An unrelenting family focused on fulfilling their cosmic prophecy.

It has been ten years since Svetlana sought refuge for herself and her child in an obscure town in Russia. Ten years since she fought to keep Evander from the Jovians, her unrelenting in-laws, who harbor secret plans for both Earth and the human race.

Like any good mother, Sveta has carefully watched over her son while trying to provide a normal life amid extraordinary circumstances.

There is nothing normal about Evander.

He may be a child, but in ten years he has grown into the powerful body and advanced intellect of an adult. He is well-liked by all who know him, charismatic, genuinely kind, attractive — the type who could become the world leader the Jovians want him to be.

Ten years ago, the family let Svetlana and Evander slip away. But Evander is the key to the Jovian prophecy, and once they discover that he has matured, they will use him to build the new future for the Earth they desire.

Svetlana will do everything in her power to hold them at bay, but she knows it won’t be enough. They are coming. The only question is, what will she do when they take him?