Jeanine Lunsford loves to write realistic, Contemporary Christian Fiction with elements of romance and suspense. She writes to encourage and inspire her readers, to awaken their emotions, to make them laugh and cry. Her stories are fast-paced with realistic characters, gripping plots, and lots of twists and turns. She likes to take her readers to places they’ve never been, introduce them to people they probably would have never met, and help them discover new depths in their hearts. 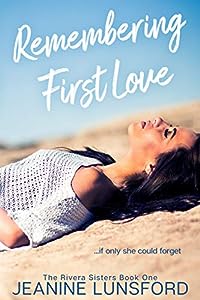 Will Carina Rivera allow the shadows of her past to darken her future?

Only 10 months apart and almost identical in appearance, the Rivera sisters have often been mistaken for twins. From clothes and shoes to the bed they sleep in, the inseparable girls have always shared everything.

But the dreams and goals of Amelia and Carina Rivera are as far apart as the reputations they hold in the tight-knit Cuban community of Hialeah, Florida where the two girls have been raised by their single mother and grandmother.

Known as the good Rivera sister, 21-year-old, Amelia is ready to settle down as a young bride, to raise a family as a military wife, and to pass down her strong, Christian beliefs to the children she hopes to have.

But 20-year-old Carina has different ideas about life. She believes being the first in her family to earn a college degree will polish the tarnished reputation she holds in the community as the bad Rivera sister. She’s ready to face the challenges before her and certain a successful career will liberate her family from the hand to mouth existence they’ve always known.

When Carina is suddenly forced to become her family’s sole breadwinner, she’s faced with a challenge greater than college or career — Aaron Mendoza, her womanizing supervisor at the garment factory. Dark, forbidden, and wildly handsome… an image of Aaron has found its way into Carina’s soul through her daytime thoughts and nighttime fantasies of him. But there are other images looming in her soul as well — ghosts from unhealthy relationships in her past that aren’t quite ready to let her go.

Will Carina allow the shadows of her past to darken her future?

Can she escape from the trap set for her by the evil dwelling within Aaron Mendoza?

TRIGGER WARNING: This novel deals with relationship violence and its impact on the main character. Though not in graphic detail, there are scenes that describe physical violence that may be disturbing to some readers.

~ The main character (Carina Rivera) is a victim of child molestation which is mentioned in the prologue (with no details).

~ Sex is alluded to with no graphic details (all behind closed doors). 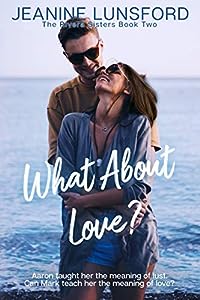 What About Love? (The Rivera Sisters Series Book 2)
by Jeanine Lunsford

In the 2nd (able to stand alone) novel of the Rivera Sisters Series, Carina Rivera is beginning to pick up the pieces of her shattered life. She’s living with her sister, Amelia in Texas, looking forward to a bright new future, hoping to find a good and godly man.
But Carina’s four-year marriage to Aaron Mendoza has reinforced the lie she began to believe as a child victim of molestation — that a woman is nothing more to a man than the object of his passion.
When she’s reunited with Mark Preston, the gorgeous, single father she met at the Miami airport the night she left Aaron, she knows it’s not happenstance. There’s something about his ice-blue eyes and soft, warm kisses restoring her hope of discovering the meaning of a man’s love for a woman. But Carina’s divorce attorney has other plans. Handsome Eric Martinez persuades Carina to abstain from dating until her 6-month Texas residency requirement is established, putting an end to her blossoming relationship with Mark. Eric has his own private reasons for keeping Mark and Carina apart — she’s reignited the fiery passion that once burned in his soul. He wants Carina for himself and he won’t allow anyone – especially Mark – to quench the flames. When Mark discovers the shocking secrets Eric has been hiding from Carina, he reveals the truth about Eric to her. But is it too late? Has Carina already been captivated by Eric’s allure? 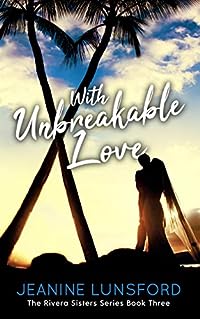 Carina Rivera has everything going for her — her fiancé, Mark is her perfect complement and ideal partner, and her love for his baby daughter, Ree has helped her through the pain of losing her own daughter.

But on the night before her wedding, Carina becomes paralyzed with self-doubt. Is she ready to say her vows or is there something lurking inside her that doesn’t belong in her marriage with a good and godly man like Mark? Is the bad Rivera sister — the woman she’d been before she knew Mark, hiding somewhere deep inside her soul, longing for her ex-husband, Aaron Mendoza, the man whose abuse had almost destroyed her life?

When Carina asks God to prove to her that the bad Rivera sister is finally gone, she has no idea that God is about to answer her prayer in an unexpected way. Will the earth-shattering events that are about to take place shake her faith, or will they help Carina become the woman she’s always wanted to be?

“With Unbreakable Love” is the exciting conclusion to the *first trilogy of The Rivera Sisters Series. Easily able to stand alone, this novel blends thriller and inspirational elements with romance and suspense to keep the reader on the edge of their seat.

*Carina Rivera — From Victim to Victory is the 1st trilogy in the Rivera Sisters Series. 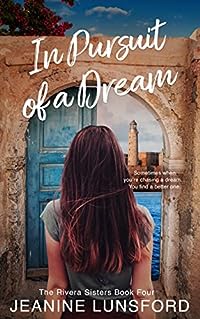 Sometimes when you’re chasing a dream… you find a better one.
When Amelia and Carina (the Rivera sisters) discover an unsealed envelope among a cache of letters addressed to their estranged father in their deceased mother’s journal they read the letter inside.
Their mother is gone now, but she has left her dream behind — a vision only Amelia and Carina can turn into a reality.
Willing to do whatever she must to fulfill her mother’s dream, Carina packs her bags — she’s ready to fly to Cuba to locate their father, Enrique (a man she and Amelia have never met).
But Amelia is reluctant to accompany her sister. She has a dream of her own to pursue — a dream with a high dollar price tag and a wealthy (but married) businessman attached — a dream that will cost Amelia far more than she is willing to pay.