Alice Sabo is the author of character driven stories in post-apocalyptic, space opera, fantasy and mystery series. Across genres, her characters deal with trying to make positive choices in difficult and often dangerous situations. Whether seeking lost cultures in an unforgiving galaxy or finding a murderer on the streets of LA, her books have strong world building, multi-layered characters and a satisfying culmination. 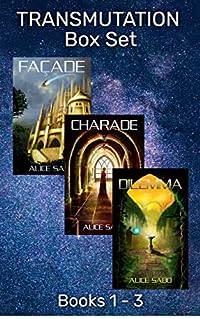 FACADE
Aliens, telepathy and political intrigue. A human spy and his horned, alien partner encounter a new species that’s been incognito for centuries. They discover a level of psi-skills that borders on magic and endangers the people they love.

CHARADE
As Elaan learns about who she is and what her species can do, the galactic government pressures her for more information on their enemy. Hunter and Trash want to reconnoiter the enemy’s territory, but they have to find it first. Hunter’s past endangers them all when a woman he’s never met makes revelations about his origins.

DILEMMA
Tensions rise as Elaan begins a delicate dance between the UCFS’s demands and her people’s needs. An unexpected gift of knowledge leaves her reeling. Hunter has to deal with the new revelations about his origins, the trial and the resulting repercussions, all the while working to keep his family safe. Trash gets a chance to rescue a brother in need and add him to the Embassy’s staff. More Iguacans flood into the Embassy seeking sanctuary. More unusual gifts are discovered. And with every secret learned, Elaan uncovers facts she’d rather stay buried.