The Alien Mate series by Cara Bristol are swoon worthy, humorous alien mail-order bride romances set on an ice planet. Exciting and filled with suspense, each book in the series is a standalone read that is filled with plot twists that are sure to entertain. Enjoy! 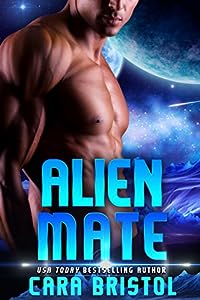 I’m Starr Elizabeth Conner. Earth’s government falsely convicted me of a crime, packed me on a ship with other female felons, and sent us to Dakon, a primitive, frozen wasteland of a planet.

I am Torg. I have waited 34 rotations for a mate of my own. With this shipment, I was sure to get a fine, sturdy mate who’ll bear me many daughters. Instead, I receive a small, curvy, pale-haired female who looks at me with anger and fear.

It is only when we ‘kiss’ that I believe things may work out between us. But I’m hearing rumors that Starr and her shipmates are law-breakers. To survive, Dakonians must obey all laws… or be exiled into the frozen wasteland. Just when I have found my mate, will I have to banish her? 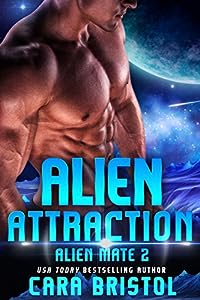 How insane is it to marry an alien as a publicity stunt?

I’m Sunny Weathers. You probably recognize me from my reality show, Sunny Weathers’ Excellent Adventures. I’ve had to perform a lot of crazy stunts in my career, but this one takes the cake! The producers are sending me to another planet to become an alien’s mail order bride. I’m not allowed to tell anybody it’s a gimmick, and as soon my contract is up, I’ll be leaving planet Dakon. Unfortunately, I hadn’t counted on my attraction to Mr. Tall, “Darq,” and Handsome…

I’m Darq. The moment I laid eyes on the female with pretty mud-colored hair and a sunny smile, I knew she was mine. Competition for females is fierce, and I was determined to claim a mate from the latest shipment from Earth, so I broke the rules. If anyone finds out, my own brother would banish me to the icy wilderness, and I’d lose my mate. I will do anything to keep her…

Alien Attraction is a stand-alone read in the Alien Mate series. Readers 18+ 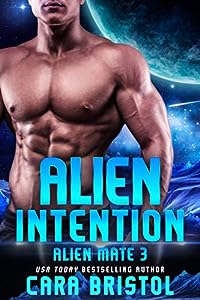 Our attraction unleashes a perfect storm…
I’m Stormy Weathers. My love life on Earth is one natural disaster after the other. I’m attracted to bad boys, rebels, commitment-phobes. In a crowd of choirboys, I’ll manage to find the jerk. All I want is a man who’ll love me and my young son, so I’m going to an icy planet to become an alien’s mail-order bride. This time will be different! The chemistry I feel with Romando is electric. It doesn’t matter what my sister or her mate or their tribe says, mutual attraction this strong can’t be wrong, so I’ll do anything to get him…

I’m Romando, an outcast in my own tribe. One rash, angry act turned me into a pariah and almost got me banished. But what everyone resents the most is that I’m one of the lucky few who’ll be getting a mate. The instant Stormy Weathers blows into Dakon with the other Earth females, my horns tingle. She is meant for me, but I resist the instinct to claim her. You see, she’s related to my nemesis responsible for my outcast state. Honor and pride dictate that I reject her as a suitable mate before she undermines my good intentions. If only I could get her out of my mind… 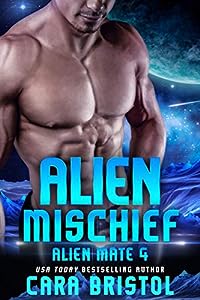 She’s pretending to be a man. Will he see through her disguise in time to prove to her that she’s the right woman for him? Or will a little mischief ruin her second chance for love?

My name is Madison Altman. Don’t think because I’ve disguised myself as a man and have accepted a job that takes me away from Earth that I’m running away from love. That’s not true. I met the love of my life–but he was killed on our wedding day.

Chaperoning crazy women traveling to Dakon to become the mail order brides of aliens is just a way to pay the bills.
Unfortunately, on this latest assignment, the ship returned to Earth without me! Luckily, Enoki came to my rescue. He might be hot, and sexy as hell with his gravelly voice and throbbing horns, but he believes I’m a man, and we’re friends, not lovers. That’s how I want it. That’s how it has to be. As soon Enoki can get me a flight to Earth, I’m leaving this frozen planet for good.

I’m Enoki, leader of Dakon. For the longest time, whispers in the wind told me my Fated mate was coming. Whispers turned to shouts when the recent shipment of females arrived, but none of them were mine. I must accept the Fates were wrong. I’ll never get a mate.

My purpose now is to help the stranded Earth man return to his home planet. Even though Madison is a Terran, we’ve developed a strong bond. I know I’ll miss him, but because we’re friends, I intend to do everything I can to help him leave.

Why do the whispers tell me not to let him go?