It’s beginning to look a lot like Summer Vacation!!! This weekend the Basset family is going camping! Three awesome days of relaxing, sunshine, and a bit of swimming. This is a camping trip that we have made into a bit of a tradition the past three years. We shop for a bunch of food, pack up the trailer, and head down the road ten minutes to my friends house. It would take only five minutes to get there, but I make hubby drive extra slow with the trailer. What I should do is let him drive as fast as he wants and just walk there instead. HA! I know it must sound ridiculous to go through all that trouble just to go such a short distance, but it actually does feels like a million miles away when you camp out in the backyard. What I find so crazy is we are so close to our friends, but we haven’t seen them since Easter because we have been so busy. Time to catch up!

Suburban housewife Juliette Granger has been living a secret life… a life that’s about to turn deadly for everyone she loves.

Fearing for her life after witnessing a gruesome murder, Juliette Granger whisks her two-year-old daughter Nora away in the dead of night and flees, planning to start a new life in a small, forgettable town under an alias. An hour into the escape, headlights flash behind her. A vehicle pulls alongside, and a masked man demands she stop the car. She refuses him, and a deadly game of cat and mouse begins.

If you love a fast-paced mystery with a surprising twist, you’ll enjoy Roadkill, written by a New York Times and USA Today bestselling author. 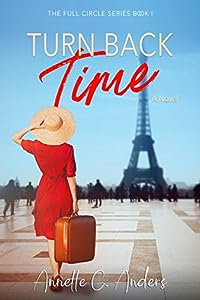 Letting go of the past is the hardest thing to do.

Three years ago, a book and a song led Stella to the love of her life. Two years later, he shattered her heart. Determined to shake off the memories of the fateful day, Stella promises herself she’ll move forward. Little does she know, when she accepts her best friend’s invitation to a week-long trip to France, that the ghosts of her past will come roaring back.

David has reached the pinnacle of his career, but loneliness is a painful price to pay for being in the spotlight. When he catches a fleeting glimpse of Stella a year after their breakup, David realizes he has one chance to win her back. If he fails to earn Stella’s trust again, he’ll be cursed to follow in the footsteps of one of literature’s most haunted and desolate characters — the one he brings to life night after night.

What will it take for Stella and David to remember their dreams, and to believe in their future?

TURN BACK TIME is a story about forgiveness, second chances — and believing in yourself. 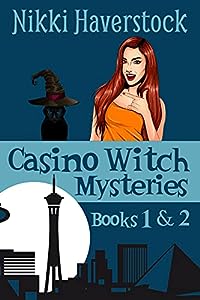 The first 2 books in the popular Casino Witch paranormal cozy mystery series.
Ella has discovered that she’s a witch. Luckily with new friends and a cranky cat familiar, Ella will not be alone as she contends with her newly discovered paranormal powers and more than a few dead bodies along the way.

Of Murders and Mages: Casino Witch Mysteries 1
Three ways that Ella’s life is totally messed up:
1. Her new coworker is as cranky as he is attractive
2. A mischievous cat has decided she needs a familiar
3. She just found out she’s a witch who can read the emotional hologram of a magical death (and isn’t that a mouthful)
And oh yeah, there’s five dead bodies, and no one knows how they are connected. Now she’s drawn into a madcap investigation at the casino where she’s managed to snag a job. She must navigate learning her new mage abilities, a topless burlesque show, a jealous girlfriend, gamblers of all varieties, and magical chocolate cake, all while not setting herself or others on fire before the murderer makes her the next victim.

Which Mage Moved the Cheese? Casino Witch Mysteries 2
Ella’s Super Awesome Guide to Paranormal Cheese:
1. You eat it, but there are weird side effects.
2. The ingredients can be really gross.
3. You don’t use it to squash people.

When the ex-president of the Paranormal Cheese Council is found dead under the world’s largest wedge of cheese, Ella is on the case! Unable to admit who she really is, she goes undercover. But can she, her klutzy sidekick, and the world’s most arrogant familiar escape the Booby-Trapped Queso of Doom, or stop eating the magically addictive beer-cheese fondue without giving things away to the anonymous villain?

Endless warfare has ravaged Earth. Billions are desperate to escape.

Major TJ Wright of the Britannic Alliance has spent most of his life fighting to save human civilization, but the BA looks set to finally fall.

Then his ship, the Valiant, picks up a distress signal that leads him to the mummified remains of a Dark Ages warrior chieftain.

Only the ‘mummy’ has a pulse.

Is the mystery man who he claims to be? Can he and Wright bring the Alliance back from the brink of disaster?

The Valiant is book one in the epic space fantasy adventure, Star Legend. 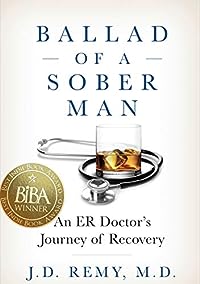 Ballad of a Sober Man: An ER Doctor’s Journey of Recovery
by J.D. Remy

A successful emergency physician full of narcissism and ego wakes up in detox, his life having burned to the ground.

Dr. J.D. Remy — physician, father, husband, and medical missionary — awakens one morning to find himself in rehab for alcoholism. His destructive behavior has resulted in the loss of his marriage, children, career — and almost — his life. Faced with the challenges of rebuilding a foundation, Dr. Remy must accept that he is an alcoholic and summon the courage to tame the demons that caused such dire circumstances.

Over time, he makes new connections in sobriety and rekindles friendships from his former life. With the aid of old friends and his new sober network, he navigates his program as a professional in long-term recovery. He must overcome unemployment, a devastating divorce, the estrangement of his children, social stigma, and the coronavirus outbreak.

Armed with the gift of desperation, a strong twelve-step program, and his recovery “mosh-pit,” he learns to accept and let go, confronting the worst of his character flaws to emerge on the other side as a better version of himself. Ballad of a Sober Man is a raw and realistic memoir of one man’s difficult journey through recovery, as he interacts with an eclectic cast of characters, finds romance in a brave new world, and battles a global pandemic…