Did I Hear SUMMER VACATION????

Today my youngest baby basset is graduating from 8th grade. I should be getting all mushy and emotional, but I’m not. I know I am going to see a lot of posts on social media by parents who just can’t believe how fast their sweet babies are growing up. Yes, my sweet baby is growing up fast, but it’s also Summer vacation! Yes yes, they are amazing… BUT SUMMER VACATION! I felt this same way when I was a kid. While all of my classmates were signing yearbooks and going on about how much they will miss them, I was racing home to be lazy for three months. Thundercats and Voltron Force were waiting for me to plop myself on the couch. I am very proud of my sweet baby bassets. Let’s celebrate with a bit of Iron man or maybe even Thor! 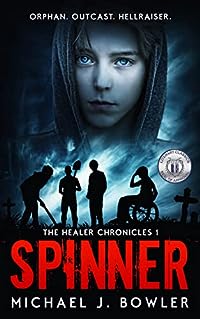 Fifteen-year-old Alex is a “spinner.” His friends are “dummies.” Two clandestine groups of humans want his power. And an ancient evil is stalking him. If people weren’t being murdered, Alex might laugh at how his life turned into a horror movie overnight.

In a wheelchair since birth, his freakish ability has gotten him kicked out of ten foster homes since the age of four. Now saddled with a sadistic housemother who uses his spinning to “fix” the kids she injures, Alex and his misfit group of learning disabled classmates are the only ones who can solve the mystery of his birth before more people meet a gruesome end.

They want to know who murdered their beloved teacher, and why the hot young substitute acts like she’s flirting with them. Then there’s the mysterious medallion that seems to have unleashed something evil, and an ancient prophecy suggesting Alex has the power to destroy the world.

Friendships are tested, secrets uncovered, love spoken, and destiny revealed. The kid who’s always been a loner will finally learn the value of friends, family, and loyalty. 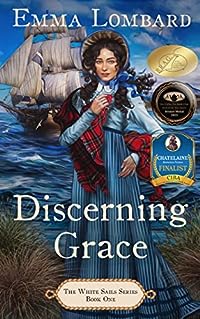 As the first full-length novel in The White Sails Series, DISCERNING GRACE captures the spirit of an independent woman whose feminine lens blows the ordered patriarchal decks of a 19th century tall ship to smithereens.

Wilful Grace Baxter, will not marry old Lord Silverton with his salivary incontinence and dead-mouse stink. Discovering she is a pawn in an arrangement between slobbery Silverton and her calculating father, Grace is devastated when Silverton reveals his true callous nature.

Refusing this fate, Grace resolves to stow away. Heading to the docks, disguised as a lad to ease her escape, she encounters smooth-talking naval recruiter, Gilly, who lures her aboard HMS Discerning with promises of freedom and exploration in South America.

When Grace’s big mouth lands her bare-bottomed over a cannon for insubordination, her identity is exposed. The captain wants her back in London but his orders, to chart the icy archipelago of Tierra del Fuego, forbid it. Lieutenant Seamus Fitzwilliam gallantly offers to take Grace off the fretting captain’s hands by placing her under his protection.

Grace must now win over the crew she betrayed with her secret, while managing her feelings towards her taciturn protector, whose obstinate chivalry stifles her new-found independence. But when Grace disregards Lieutenant Fitzwilliam’s warnings about the dangers of the unexplored archipelago, it costs a friend his life and she realises she is not as free as she believes.

DISCERNING GRACE is historical women’s fiction that will appeal to fans of feisty historical female leads. 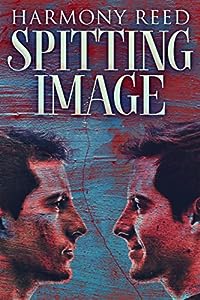 What if you had a twin – who was a better version of you?

When Everett Reyes loses his adoptive mother – the only person who ever believed in him – his bullying stepbrothers find a way to keep Everett’s inheritance. They won’t even let him keep Mom’s cookware, though she’s the reason he became a chef.

All he has left is a failing cafe, a rattletrap car, and an ex-wife he can’t stop fighting with.

Bereft of family, he hires a private investigator to track down his biological parents. He’s not surprised to learn that they’re dead, but he’s shocked to discover that he has a twin brother, alive and well in Austin, Texas.

The similarities between Everett and his brother Evan are amazing. They’re both chefs, they both married aspiring musicians, and they’re both fathers – evidence of their deep twin bond. But the more Everett learns more about his brother, the more he feels like he’s looking at the life he should have had – would have had if they hadn’t been separated. It’s embarrassing how Evan seems to be more successful than Everett in every possible way.

His friends tell him to start with a phone call, but Everett decides to drive to Austin and surprise Evan on their shared birthday.

After all, what better gift could a man receive than to be reunited with his long-lost twin brother? 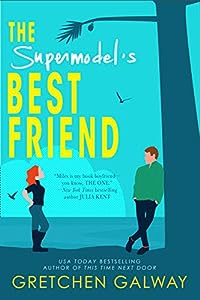 Lucy Hathcoat’s best friend the supermodel is getting married to a billionaire — what better place than their week-long wedding in a luxury eco-resort to find a new man? Lucy isn’t picky; she just wants a decent guy who’s eager to start a family. Someone as logical, responsible, and practical as she is.

Definitely not the six-foot-five, fun-loving Miles Girard. Being totally hot and charming is not important. She doesn’t need a college dropout who makes her laugh. A man who makes her jump in his lap and kiss him. A man who is pathologically wary of marriage and thinks she needs him more than she needs a husband.

Then again, Lucy’s starting to feel like maybe, just maybe, she can’t live without him… 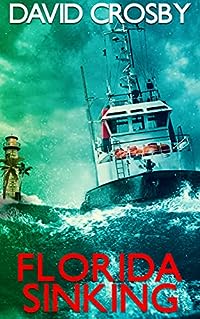 And as the homeowners suddenly realize their sinkhole-ridden land is worthless, they’re sometimes driven to homicidal behavior…

Will, a semi-retired investigative reporter turned amateur sleuth, is too big-hearted not to get involved. While researching a hard-hitting expose on climate change and the quality of water in Florida, he discovers the deceitful real estate developer is constructing an entire development on top of a massive sinkhole. Whole neighborhoods could slide into the muck!

The developer will stop at nothing to conceal his intricate fraud, but luckily, Will comes equipped with his ever-sharp prose, his commitment to Florida social issues, his beloved trawler, The Wanderlust, and a little help from his friends.

Still, the shoddy real estate cartel’s a behemoth — fortunately for the reader, it won’t be easy!