If you are looking for a steampunk fantasy series for teens then look no further than the Divine Warriors books by Kristen S. Walker!  If you like magical girls, monstrous machines, and high-flying adventures, then you’ll love Kristen S. Walker’s series of guns and gears. You won’t be able to put it down. Enjoy!

A clumsy school girl with the magic of a goddess. Mechanical beasts attacking her friends. Can she become a divine warrior and save the floating city?

Fifteen-year-old Riwenne is bad at school, chronically late, and lost in a daydream, but she has help from her best friend, Nexita — until the two of them get separated. During the mysterious test on Choosing Day, they both wanted to become priestesses, an important job in the sky city. But only Riwenne became a novice, and Nexita was chosen by the engineers. Now she’s on her own for the first time in her life.

When a talking bird tells her that her best friend is under attack, Riwenne faces her worst fear. She must become a divine warrior and save her best friend from mechanical beasts!

As she juggles warrior training and priestess duties, Riwenne can’t let herself get distracted. She must recruit other warriors and lead the quest to find out the mystery behind the mechanical beasts, but most of all, she must follow her heart.

If she trusts the wrong person, she’ll face the gods’ judgment.

Betrayed by her sister. Hunted by the empire. She gave up her normal life to become a divine warrior — then she lost the magic she needs to survive.

Riwenne escaped the capital in the sky with her life and most of her friends, but one loss haunts her. Her sister, Nexita, betrayed them all. Now Riwenne’s out of magic, and nowhere is safe for the divine warriors. Defying the Empire put a price on their heads. With nothing but an airship and a few gods on their side, they need a new way to fight back!

When she learns that their enemy, the sun goddess, is arming bionic witches with blood magic, Riwenne can’t ignore her mission to save the innocent. The only magic that can stop the sun is the moon goddess. But the moon goddess was banished, her name is forbidden. Riwenne must search for ancient clues to free the moon.

As she struggles to regain her magic and find her place in the team, Riwenne is tempted to give up the fight. But nothing can ever be the same again. Sooner or later, she’ll have to face the one person she dreads — and this time, the fight is to the death.

Can she kill to save the people she loves? 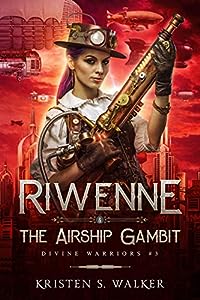 A young prophet still learning her powers. A single city standing against the might of the empire. Can the dream of the rebellion last?

Fifteen-year-old Riwenne never considered herself a prophet, but when she rescued Lyndamon City from destruction, people called her a miracle worker. Now the city she saved is under an even greater threat. When they declared their independence, the rest of the empire prepared their airships for an attack. Lyndamon is still defenseless from the last battle and they don’t have resources to rebuild.

In a desperate bid to protect her fragile home, Riwenne must find more divine warriors to fight for her cause — but not everyone with a god’s power is on her side. When mysterious warriors attack, she must persuade them to join her team or she must defeat them. Still haunted by her last kill, Riwenne is reluctant to use lethal force again.

Between negotiating with gods and her new relationship, Riwenne barely has time to rest. Her sleep is haunted by nightmares of what she’s done and visions of what could happen if she fails.

The fate of the gods hangs in the balance.

A young priestess sworn to a forbidden goddess. A hard-won treaty to protect her people. But now a new prophecy could destroy their fragile peace.

The teen prophet Riwenne has performed many miracles to protect her friends and save her city from the oppressive empire. Now she has a new ally, another nation who declared their independence and helped to defend her city. But when Riwenne shares her religious beliefs, the new prime minister of the neighboring country is reluctant to accept them. His people have been burned by priestesses before — and they executed the old priestesses for their crimes.

As Riwenne tries to show her allies the power of magic, a mysterious circus appears in the city. Calling themselves the Scientific Circus, they are spreading a prophecy of their own — that electricity and technology can free humanity from the need for any gods. Their Chief Scientist challenges Riwenne to a contest between science and magic.

She may be a divine warrior, but Riwenne can’t fight her way out of this. When violence isn’t the answer and people aren’t impressed by her miracles, she must find a new way to win people to her side. She can’t afford to lose the only allied nation that she has against the empire.

Or she will be the next priestess to meet the executioner’s blade. 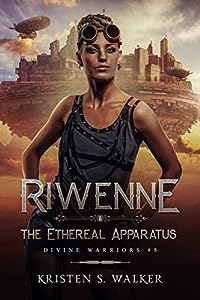 A teen girl chosen to wield the power of a goddess. Flying cities falling from the sky. Can she find out why the machines are failing and fix them in time to save everyone?

The teenage prophet Riwenne performed a miracle when she saved her flying city from crashing into the ocean. But no one alive knows how the cities became airborne hundreds of years ago. The high priestess tried to create her own flying city and put a barren rock in the sky, too high for anyone to live on… and now it’s falling.

All the imperial sky cities are falling. The Synthetic Ethereal Apparatus that holds up each capital is failing. If they crash, thousands of homes and businesses will be destroyed. Massive devastation could ruin her enemy’s territory but at the cost of innocent lives.

To save the floating cities, Riwenne will need more power than she’s ever used before. She must find the secret of the Ethereal Apparatus and how to repair it. She’ll need new allies: the planetary warriors who refused to join her once already. But it also means working with her enemies in the Empire who tried to kill her. She can’t stand by and let their people die.