Welcome To The Planet

BIG NEWS! One of the Monarch butterflies emerged from the chrysalis tree I have on my deck!!! I was so happy I could be there to see the first one emerge. It is a female and she was perfect looking. I was worried all the handling of the chrysalis I did would do more damage than good. In fact she was one of the ones I had to glue the string to the stem of the chrysalis just to be able to hang her properly. SUCCESS!!!! I will post pictures on my other blog Pollen Patch (click here) later this afternoon. I think four other butterflies will emerge today as well, so I will be sure to post pictures of that as soon as it happens. YAY!!!!

A brutal murder. A condemned assassin with days left to live.
No one could figure out exactly why Sandra McDowell had to die.

What was her connection to The Raven, an aging hitman twenty years on death row with only days left to live?

Clues are plentiful, but all are dead ends.

The Raven is a mind-bending mystery thriller, a twister of a tale that will keep you up reading long into the night. You can’t read just one!

Join Harry Starke as he tries to unravel the nightmare world of… The Raven. 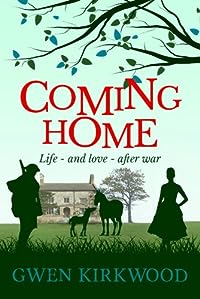 August, 1945. Victory over Japan has been announced and everyone in Megan Oliphant’s home town in Scotland is celebrating the end of the war. The boys are ‘Coming Home’.

Megan has been waiting desperately for the day when Steven Caraford, the best friend of her older brother, finally returns. After long correspondence during Steven’s time away – and after supporting each other through her brother’s death – Megan can only hope her feelings for him are mutual.

Steven has longed for the day when he can return home to Scotland, and – although it will mean long days, little money and no security – his heart’s desire is to have a farm of his own. While Megan heads off for college, Steven struggles to build up his new home – and both must try to work out what the other is feeling about their future together.

Coming Home is a moving romantic drama about building a new life after the Second World War – and about searching for love, stability and happiness. 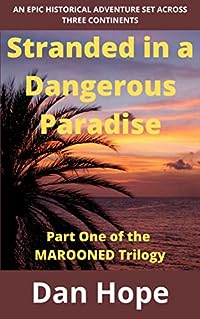 Stranded in a Dangerous Paradise (Marooned Book 1)
by Dan Hope

Suspense, mystery, thriller, action-adventure, seafaring disaster novel, historical saga, travel tale – this epic story set across Europe, Africa and America and the wide expanse of the Atlantic Ocean has it all.

Stranded in a Dangerous Paradise is the first book in the MAROONED trilogy.

The year is 1540. The Devon Falcon, sailing from the tiny harbour of Seaport, in Devon, is caught in a massive hurricane on her way home from an extended trading voyage and is floundering without masts or sails somewhere in the Caribbean.

Will the ship stay afloat and the crew survive? Will they reach land and, if so, will they find it inhabited or even habitable?

Back in Devon, the family of the missing crew realise that all is not well. The ship had embarked on an exploratory voyage to a new destination, a trip much further than they had been before.

Due to the many unknowns of the route, as part of a pre-arranged plan if the Falcon didn’t return they would set off to search for the missing ship. As a precaution, the crew of the Falcon will have left a trail of their next destination at each stop along the route.

Can the family in Devon raise the funds and get the ships to make the voyage? Will they find the missing ship and their family, friends and neighbours?

They say the only thing two dog trainers can agree on is that the third is wrong. When that trainer winds up dead, all bets are off.

Nomadic dog trainer, Nell McLinton, has finally decided to settle down after years of traveling the country with her dogs, Rush and Simon. Nell thinks she’s found her dream job at the renowned Cascade Canine Club in sunny Central Oregon, right up until meeting her nightmare colleague: Fellow trainer, Bryan Reed

Everyone claims Bryan’s bark is worse than his bite, but Nell’s not so sure. Bryan is rude, arrogant, and rough with the dogs, even his own. Nell isn’t the only trainer at the facility who’s clashed with Bryan; but when she’s caught standing over his body at the bottom of a flight of stairs, Nell finds herself at the top of the suspect list.

Can Nell prove her innocence in time to save her reputation and her career? Or will she wind up the next casualty at the Cascade Canine Club?

If you love adorable dogs and their devoted owners, complex murder mysteries and indomitable amateur sleuths, and straightlaced police detectives with meddlesome journalistic foils, pick up your copy of “The Rottweiler Howls At Midnight” now! 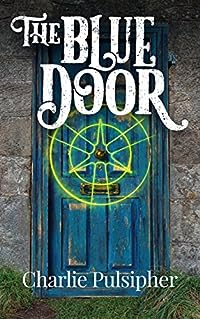 Open the door. We’re off to see the genocidal wizard.

After fires kill thousands all over the world in an instant, the few survivors are left with a symbol scorched into their lives and more questions than answers. Nick falls into the system. Cindy moves in with her godmother. They try move on, to forget.

But then water begins stalking Nick around high school, awakens latent synesthesia, and applies scents to the colors of a magic he didn’t know he had. Cindy, a weaver of fire, knows more, but not enough to prepare them for the appearance of a living portal.

They will cross this threshold to find answers to their parents’ murder, what their gifts mean, and what plans a magical serial killer has for the world. With the help of a feisty sylph and a sentient door, they just might make it, but only if they can survive the angry nixies, bloodthirsty redcaps, bone-crushing trow, and the friendship of a fairy queen who may not want them to succeed. 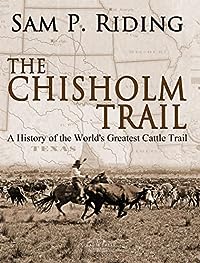 The Chisholm Trail: A History of the World’s Greatest Cattle Trail
by Sam P. Riding

The Chisholm Trail was the original “Cowboy Highway” stretching hundreds of miles from the ranches of Texas to the Cattle markets in Kansas. This classic work chronicles in vivid detail the entire journey of the trail and is complete with descriptions of actual incidents and events that occurred along the trail as well as stories of famous and infamous cowboys, outlaws, rustlers, Indians, and lawmen who made the journey. This story includes character studies and descriptions of many frontier characters from Jesse Chisholm, a western man and the trail’s namesake, to the notorious gunslinger Billy the Kid, to countless other lawmen, Native Chiefs, and other western characters, this book leaves no detail uncovered as the author, who himself traveled the trail during its golden era, shares his story.