You go and burn down one little world, and everyone gets upset. Virgil McDane, once a a powerful Wizard, explorer, scholar, and soldier, but one mistake later and that all changes. Join Virgil in these action-packed adventures that will have readers hooked! Enjoy! 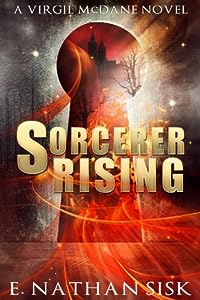 Virgil McDane was a powerful Wizard, an explorer, scholar, and soldier. A member of the Wizard’s Guild, he had spent most his life traversing the Aetherial edges of reality, where mind and matter become one and the same, delving into the mist to extract wonders great and small.

One mistake later and he was cast from the Guild. Stripped of his magic, he finds himself locked out of his own mind, struggling just to pay his rent. Now, as a Sorcerer, his education stolen, his magic in shambles, he takes any job he can get, no matter the risk and no matter who’s asking.

With Virgil’s prospects dwindling, Cyrus Aberland appears like a rope to a drowning man. He is one of the wealthiest men in the world and his fortune has been earned through inventions that rival even the greatest achievements of the wise ones. He has an axe to grind, an expedition to fund, and he knows just the man to lead it if he wants to piss off the Guild.

The Wizards call it the Arcus. Everyone else just calls it the Rainbow.

After centuries of sudden appearances, striking like lightning in the dark, disappearing just as quickly, it has appeared outside Mare City. The masses have assembled to find its source, to chase its legend, the wealth and power promised at Rainbow’s end.

Join Virgil on this action-packed journey as he guides a group of explorers through a world half-formed, its edges raw and malleable, filled with dangers formed from memory and thought. Journey with him as he struggles to protect both them and himself, endeavors to unwind the mystery of the Rainbow, and ultimately seeks to reclaim the power that was once at his fingertips. 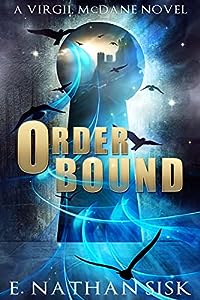 In the half-formed world of Virgil McDane, where the edges of reality blur matter and mind into something both and neither, Order is not just a concept…

Virgil McDane has never been one to back down from a challenge but escorting a squire up a mountain to be knighted by a deity of form and figment was not what he thought he would be doing when he got back from the chasing the Rainbow.

Unfortunately, he made one mistake upon returning, one that has haunted him for months. His old employer, the Tin Man, a bonified Knight of the Order of the Ring and Mare City’s most powerful mobster, had stiffed him on a job. He had practically spat in Virgil’s face, telling him to come back when he could do something about it.

And Virgil, well, he did just that. He collected his backpay, right after he blew the doors off the Tin Man’s building and put a dozen of his guys in the hospital.

Of course, the check came with a promise, more expensive than the meager sum written on its face. Virgil finds his life in danger, his every step shadowed by professional killers.

So, now it’s time to play nice with the Order of the Ring, to buy a bit of goodwill that even the Tin Man can’t ignore. One of their squires needs a mage to become a full knight, to escort him to the halls of his deity where he can be gifted his mantle and knighted true.

So what if the Order always use Wizards? Who cares if they live in a part of the world that sees Sorcerers as mass murderers and mad men? Does it matter if their deity views discipline as piety, smiting the chaotic as heretics?
Come find out.

Join Virgil once more as he ventures into another imaginative, action-packed facet of his world. Follow as he helps a young man of virtue and restraint seek to make something more of himself, to be knighted into the Order of the Ring. Embark on a journey that will change Virgil’s life in ways he cannot even possibly imagine. 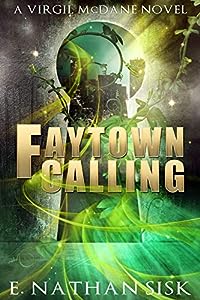 Virgil McDane has made some enemies in his time. Most of them are dead, but apparently someone didn’t take the hint.

A murder has rocked Mare City. A prominent Wizard, Virgil’s last remaining family, has been violently killed. The Guild is investigating but they have an agenda all their own, one Virgil does not trust. The Coven too, but Virgil has little more faith in America’s agency of Witches than he does the Wizards.

Now, to solve his uncle’s murder, Virgil will have to go where few have gone before. He has ventured across the world, seen arcane civilizations and supernatural beings, gods and lesser things formed from imagination and memory. But now he will have to delve into a realm stranger than any he has faced before.

The heart of his own city.

FayTown is an ancient neighborhood, founded by Fay, its people long forgotten by their homeland. Absorbed as Mare expanded, they have been ignored and shunned by the rest of the city. The neighborhood has grown over time, changing and evolving, fed by their magic. Now, it is a domain that challenges every natural law (and not just a few of the civil ones).

Worse, something is disrupting the neighborhood, throwing havoc into the semblance of order it has maintained these past centuries. A dark presence thrashes against its bounds, sending waves through the city.

A vast array of enemies stands between Virgil and finding his uncle’s killer. He will need help from his past, every ally he has made since becoming a Sorcerer. A knight newly minted, a nun with secrets all her own, new and strange allies with their own agendas.