The family that slays together stays together. Cruel Empire by JK Daniels and Robyn Wideman is an exciting coming of age progression fantasy that fans of Cradle and He Who Fights with Monsters will be sure to enjoy. Grab your copy TODAY! 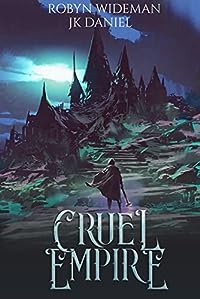 Oren and his sister June both work with their mother in the family business. Life in the empire is dangerous but they are doing alright. Until one day they run into the son of the local magistrate and things go wrong.

The magistrate declares that Oren has wronged his son and the only recompense is June’s hand in marriage. Instead of letting her children suffer at the magistrate’s cruel abuse of his powers, Sanna decides to take June north to her homeland. But the journey will be long and hard, full of monsters, magic and soldiers hell-bent on bringing them back.