I have no clue if the critters in the backyard were having a party or selected my yard to have their nightly fight club, but the noise was crazy creepy. It sounded like demons were having and awesome party and boogying down in my flowerbeds. My brain, being the jerk that it is, decided to play some horrific scenarios so that there was no way I could fall back asleep. I know for a fact that there are raccoons, opossums, rats, cats, and a squirrel (I have only seen one in all the years I have lived in this house) that visit the yard nightly. Logically speaking that is who is making all those horrible screeching and squealing noises. My brain won’t let me off that easy and it showed me what all horrible monsters in the backyard looked like. Thanks Brain! You’re a real jerk.

Please note this book was previously published as Revenge.

The call comes early in the morning. David and Helen Tremaine have discovered a body buried in the grounds of their large Victorian manor house, Llys Faen Hall, just north of Cardiff.

DI Jemima Huxley and her partner, DS Dan Broadbent, race to the scene to discover that a second body has been unearthed in a shallow woodland grave. And the forensic team working the site believe this is just the start.

Jemima knows this is the biggest case of her career. But it couldn’t have come at a worse time. Struggling to get pregnant, she is a woman on the edge, a woman who self-harms just to make it through the day. And with no one reported missing, no apparent motive and no obvious suspect, the investigation is anything but straightforward.

Eight graves. Eight dead women. All with pomegranate seeds placed inside their mouths.

When Jemima makes an unexpected breakthrough, she enters a desperate race against time to prevent more women dying.

Tom, a man on the verge of a nervous breakdown.

Fred is often confused and losing his memory.

These are the crew of the Scarborough fishing trawler, Dorothy Hood, as she prepares to set sail on her final fishing trip of 1973.

Owner and Skipper, Tom, is carrying the weight of the world on his shoulders. After a year of poor catches and expensive engine repair bills, he is deeply in debt. So much so, that he has had to remortgage his house.

Recently separated from his wife, Debbie, his sadness was magnified tenfold by the death of his beloved mother, Dorothy, four months previously. His main concern now is for his father, and fellow crewman, Fred. Fred`s memory lapses and episodes of confusion are now growing with increased regularity; just like the breakdowns of the Dorothy Hood`s ageing diesel engine.

Dorothy Hood isn`t just a story about four men on a sixty-foot trawler in the depths of a North Sea winter, battling against all the elements nature can throw at them. It’s also a story about true friendship, jealousy, revenge and forgiveness. But more than that, it`s a story about the unbreakable bond between a father and his son. 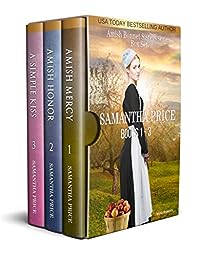 Amish Mercy: Mercy is determined to marry a man she has never met. Florence has a hard job slowing her down.

Amish Honor: Honor falls in love with a man and runs away with him. It’s up to Florence to find her and bring her back. Florence enlists the help of the new and mysterious Englisher neighbor.

A Simple Kiss: When Ezekiel Troyer came to dinner, Florence knew he would make her the perfect husband, but that didn’t stop her thinking about the mysterious neighbor next door. However, daydreams were one thing, and reality was another. Will Florence finally put an end to her foolish fantasies when Ezekiel hints at commitment?

What the readers are saying about The Amish Bonnet Sisters books:

This entire series is absolutely enthralling.

I couldn’t put them down!

The interwoven story of the family members is extremely compelling.

You won’t want to put it down!

Great read! Loved the storyline in all the books. It kept me wanting to finish it to see what happens.

The author has picked a wonderful group of characters. They blend so beautifully.

Thirty-five years of peace. One vicious attack destroys it all.

Reservist Lieutenant Justin Spencer loves every minute of flying fighters through space during his annual two-week tour with the Coalition Defense Force. The job back home isn’t nearly as thrilling as blowing up asteroids with the squadron under his command, but it keeps him close to his wife and daughter. After all, joining the CDF was only for the free education. Justin never expected a battle, much less a war.

With one shot across his cockpit, peacetime fades into memory.

An unexpected enemy emerges with overwhelming force designed to obliterate the Terran Coalition. The League of Sol has a different name, but it’s the same communist regime that chased away much of Earth’s population hundreds of years ago.

Illusions of returning home are shattered in a single instant. Simulated battles become all too real, and it’s full-on engagement or permanent elimination. Death and destruction erupt across the Terran Coalition and leave Justin in a protracted war with only one truth remaining.

The battlefield will leave no one unscathed. 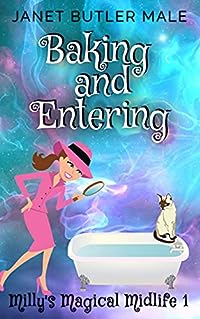 A sassy-mouthed cat. A vengeful ghost. Can a recent divorcee solve a magical mystery before she joins the deceased?

It’s 1987, and forty-year-old Milly Miller’s life is dull. Her marriage is passion-free, and her shoeshop job is ‘sole’ destroying. When she and her husband separate, Milly longs for excitement and glamour. But on her paltry wages, her life is more orthopaedic sandals than designer heels.

On divorce day, she inherits a fortune and a posh London pad. Her luck has changed, and Milly hotfoots it to the capital.

She couldn’t be happier in her new home with its fun and zany neighbours. Until she discovers a resident ghost, who claims someone murdered her. And that she’s a witch. Suspected weapon? Baked goods laced with magical vanilla essence.

She asks Milly to investigate with the help of a 200-year-old Siamese cat with a sassy tongue.

A prime suspect is the ghost’s hunky son, whom Milly falls for. But in a twist of fate, if the son is innocent, Milly must return her fortune. And if he’s guilty, she’ll lose out on love. 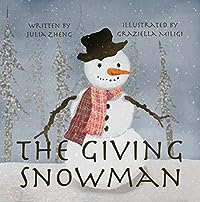 On a snowy night, Snowman lends a helping hand to Bird, Rabbit, Farmer, and Traveler when they are in need. The next day when the sun comes out and melts Snowman, Bird, Rabbit, Farmer, and Traveler work together as a team to rebuild Snowman.
The Giving Snowman is a book about kindness and gratitude. Children can learn through the story that giving to others is a virtue that connects all of us and makes our lives more beautiful.