Who needs sleep anyway? WAY over-rated. Erg. I had one eye open all night last night. There have been reports in town that there is a man in a clown mask creeping around peoples house and front doorways. I think he has even entered a few homes. It’s one thing to have a fear of clowns, but it’s a whole other beast to have a fear of a real clown that is an  actual threat. I just remembered something. My oldest baby basset dropped his phone down a storm drain yesterday. I got down on my stomach right in the opening of the drain to see if I could spot his phone. Have I learned nothing from “IT”? I hate to admit this, but I for sure would be the first character to die in a horror movie. I should just wear a red shirt so it’s clear what my role is. 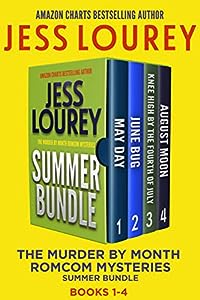 Let these romcom mysteries take you away… to a cozy world of romance, humor, and happy endings!

The day Mira’s father chose alcohol over his family, the pain about crushed her. She fled the tiny town where everyone knew her business and built a new life in the big city, one short on friends but long on emotional safety. When she caught her bass-playing boyfriend tuning another woman’s instrument, though, the life she’d carefully crafted came crashing down.

She became that abandoned girl all over again, fleeing to a small town very much like the one she’d escaped.

There, she’s shocked to land a wonderful librarian job, great friends, and Johnny, the kind, uber-sexy gardener who seems fated to be her one true love. It’s too bad about the clock ticking on her stay.

That, and the alarming number of murders.

WARNING: Belly laughs, suspense, clumsy romance, and a good-hearted crew dying to become your new best friends lie within these pages. Do not open until you’re ready to escape into a laugh-out-loud, page-turning adventure!

This convenient bundle includes these four, bingeworthy, full-length novels, which are the first four books in the series: 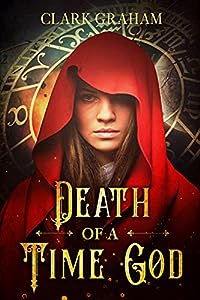 With shells burst over his head, the Time God Trevor ducked down into the narrow-slit trench. He could see hundreds of indistinct shapes coming towards his position. The men in the trenches next to him stood up and fired at the incoming enemy. Trevor followed suit. What are you doing to me, Aladar?
A new enemy has arisen, far more sinister than any the Time Gods have faced before. With the ability to find and kill them no matter where they are, the Time Gods band together for protection. When one of their own goes missing, they go on a rescue attempt with no regard to their own safety. This time, instead of a group of fanatics, the Time Gods are fighting the ruler of an entire planet and his massive army. A ruler who seeks the very extinction of the Time Gods.

Cultivate: Seed Me Relapse Edition (The Macrocosm)
by Konn Lavery

A drunken dumpster make-out session leads to the occult if you’re not careful… WARNING: DO NOT CONSUME. At least that is Logan Cook’s message after an unfortunate visit to the farmers’ market. He’s an unemployed, former druggie who finds himself wrapped up in a cult’s sinister plan, all rooting from one unfortunate meeting with a pale goth girl at the back of a bar.
His infatuation with these mysterious cloaked people blooms when he connects the dots leading back to the infamous 4-20 Drain Case, where his ex-girlfriend was murdered. Poor Logan never did recover from that incident.
Who are these people? Are they really connected to his ex-girlfriend’s death? Logan’s life is on a timer. He’s best to find some answers. 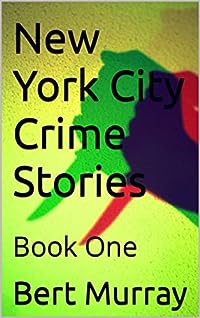 Violent crime in New York City has been in the headlines over the last year. Many people are scared to ride the subway or go out late at night. These crime stories flesh out the violence that is occurring in America’s largest city. Crime stories set in present day Manhattan. Murder, betrayal, robbery, random acts of violence and greed. 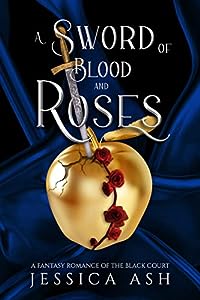 A Sword of Blood and Roses: A Fae Fantasy Romance (Hunted by the Faery Queen Book 1)
by Jessica Ash

A determined witch. A rebellious fae. An enemies to lovers romance that will bring a queen’s court to its knees.
He was supposed to kill me. Now I’m his prisoner.

I was supposed to hate him. Now I’m falling in love.

But neither love nor magic can save me. And now time is running out…

When the Queen of the Fae is after you sometimes your best bet is falling in love with the enemy, even when he’s your kidnapper…

Curl up with Trina and her twist of Snow White… Curl up with A SWORD OF BLOOD AND ROSES and discover dark delicious fairy tale romance.

You know you want to… 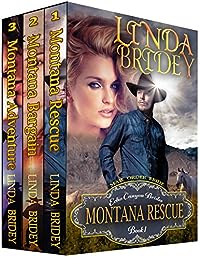 A rugged sheriff, an opinionated veterinarian, and a dusky native American. Can passion blaze a trail to the untamed West?

Box set: Over 600 pages of dusty roads leading to love on the range!

Northwest Territory, 1800s. Sheriff Evan Taft hopes attracting educated women will civilize his pioneer township. While his mail-order bride ad brings the comely and virtuous Josie into his life, he’s still haunted by his troubled past. And with a ruthless businessman intent on owning the entire settlement, Evan fears protecting the tough frontier might leave no room for love.

Dr. Winslow Wu knows his heritage makes most white folk put him beneath the animals he treats. But he sticks to his belief that the thriving small-town needs a real medical doctor… and he wants a wife. Though after marrying the charming Dr. Erin Avery from his advertisement, the gruff veterinarian discovers their instant chemistry could be rubbing him up the wrong way…

Billy Two Moons thinks he’s finally found his ideal woman. But while the good-looking native awaits his bride-to-be’s arrival after placing an advert, Billy gets involved in the rescue of Nina, a white woman raised as an American Indian and sold into slavery. And when the two are forced to marry at gunpoint, they discover their hearts may have an entwined destiny.

With the small Montana town thriving, the romantic aspirations of three strong men encounter opportunism, prejudice, and jealousy as they follow their heart’s desires.

Will these daring men and women of the frontier survive dangerous times in pursuit of love?

Buy Echo Canyon Brides Box Set to ride into a journey of the heart today!