Usually after a month of having Halloween decorations all over the house, I am pretty done with it by the end of the Halloween party. The next day I am quick to get it all down and packed back up in the attic. Right now I am about halfway done. On the other hand, the house is starting to look pretty darn empty and a slight bit depressing. I think I even hear an echo. As soon as I get the rest of the decorations down it will be time to put up Thanksgiving. Thankfully they are much less in your face, and more of a feeling of pleasant Fall. Just to add to the ambiance of the whole day, it is raining. That is not a common occurrence here in California. Let’s just hope it continues for a while. 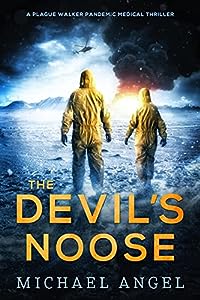 A life-threatening microbe. A desperate scientist. Can she isolate the disease before terrorists obliterate the world?

Epidemiologist Leigh Austen can’t shake her lasting guilt. As the sole survivor of her team’s encounter with the Black Nile virus, Austen is tormented with memories of her colleagues’ horrific deaths. But when an unknown pathogen annihilates an entire Asian village, she must bury the nightmares and step up to help prevent a worldwide epidemic.

Joined by doctors, specialists, and a retired special-forces officer, Austen travels to the hot-zone epicenter a mile beneath the city’s surface. But with a crazed microbiologist and a former Soviet soldier after the dangerous organism, this scientist’s fight to save millions of lives could quickly cost her own…

Can Austen contain the killer strain before demented monsters unleash a deadly blight?

The Devil’s Noose is the suspenseful first book in the Plague Walker Medical Thrillers series. If you like intriguing mysteries, memorable characters, and science-based fiction, then you’ll love Michael Angel’s action-packed tale. 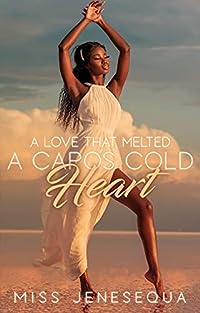 After fleeing her hometown for ten months due to her broken heart, Danaë Westbrook is summoned home and forced to get her act together. No longer fond of her free-spirited nature, Danaë’s father wants the apple of his eye to put her brains to use and makes her his newest employee. The weekend before starting her new job, or imprisonment as she calls it, Danaë takes a spontaneous night out with her best friend and the night leads to an innocent game of Truth or Dare. A game that soon lands Danaë in the path of a dangerous new attraction.

Cassian Acardi is a man of few words, but when he speaks, you sure as hell are going to listen. The tragic loss of his daughter made an icebox form where his heart once was. Leaving no room for him to care about seeking a genuine romantic connection. His family’s empire is his number one priority in life. As a boss, he’s used to being the one that sets everything in motion. So when Danaë approaches him first, placing him in the passenger seat, Cassian is intrigued. However, he tries to suppress his curiosity about the gorgeous stranger who boldly stepped to him, until their paths cross again. This time, neither of them can run from fate’s hypnotic pull determined to bring them together.

Could Danaë be the one to melt the cold-hearted Cassian or will Cassian fall victim to his inner demons, convincing himself that he doesn’t deserve love and ultimately pushing Danaë away for good? 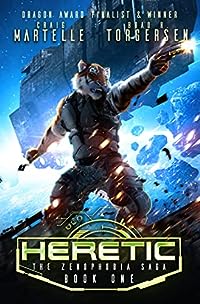 Where did the Zenomorphs come from?

Tigers, wolves, gorillas, and bears. Four planets at each other’s throats. But they have too much in common for it to be a fluke. Just mentioning the possibility that they descended from the same place gets one labeled as a Heretic.

When Sankar comes into possession of a religious text that hints at where they came from, he seizes the opportunity and makes it his mission to find the Truth.

But he needs help from all the races. With a stolen warship and a ragtag band, Sankar sets out to answer the question that is illegal to ask.

Zenophobia. Where fear of the other races started a religion and perpetuated a war.

It’s time for the worlds to embrace the future by learning their past. But the governments aren’t keen on upsetting the status quo and do everything in their power to stop Sankar and his team.

Authors’ note: We went with Zenophobia with a “z” vice xenophobia because the version with the “x” was too rooted in bad stuff that happens on Earth. This is a story set in space. 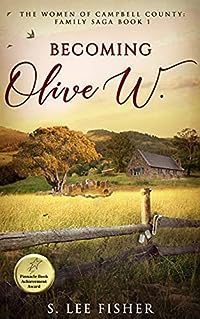 She’s beautiful and brilliant. But the world is not ready for her to shine…

Western Pennsylvania, 1905. Olive Westchester dreams of being valued. Misunderstood, resented, and ignored by her large family after her mother’s death, her only ally is an older brother who loves her unconditionally. And the hard-headed girl’s visions of making her mark are threatened by a close-minded society resentful of her superior intellect.

Stunned after a jealous teacher expels her from the eighth grade, Olive’s anger swells when her dismissive father does nothing to get her readmitted… instead pushing her to learn to be a wealthy man’s wife. But as tragedy strikes, she turns to a local laborer enamored with her beauty and makes a decision that may change her destiny forever.

Can the bold young woman shatter the chains holding her back from realizing her ambitions?

The Gift: a novella
by Lolli Powell

The greatest gifts of all are love and hope.

Elizabeth Mitchell is spending Christmas with her children and grandchildren, but the recent death of Elizabeth’s ailing husband and the absence of her son-in-law, missing in Afghanistan, hang like a shroud over the family gathering. Then Elizabeth begins to tell the story of the miracle that happened to her one Christmas when she was young and wanted to die, and the shroud begins to lift. 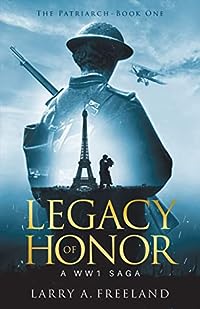 Legacy of Honor: The Patriarch – A World War One (WW1) Saga
by Larry A. Freeland, Nancy Laning

In his hometown in Wellington Ohio, Sam McCormick is on a path to follow in his father’s footsteps, leading a life of hard work as a factory manager. But in 1915, Sam loses his parents when the Lusitania is sunk by a U-boat. Soon after, Sam is called up during World War I as an infantryman with the Army’s American Expeditionary Forces and the first division to be sent to France to battle the very forces that killed his loved ones.

Now Sam’s aim is to seek vengeance for his parents’ death. He must survive brutal gas attacks, rapid machine gun fire, and relentless artillery strikes. As he and his troops repeatedly cross into “no man’s land” to take over German trenches, he will cross paths with notable leaders such as General Pershing, General Douglas MacArthur, Colonel George Patton, and Sergeant York, one of the most highly decorated American soldiers of WWI.

But Sam’s attitude changes as the war drags on, and the body count rises. Now Sam just wants the killing to stop. When he is wounded, he finds hope again to rebuild a life with his bride Marie, a witty and intelligent French nurse. But when he returns home, the United States that he loved as a civilian looks far different after the war as a veteran.

Sam McCormick must become The Patriarch. His family and way of life depend on it.

A tale of courage, sacrifice, love and honor, this 20th Century historical fiction saga addresses the horrors of WW1 and the challenges that military men faced upon returning including mental trauma, and physical illness in addition to the hardships of the Great Depression as well as other historical events before WWII, including the Bonus Army March of 1932 and the Little Steel Strikes of 1937.

The Patriarch is a must-read for readers who enjoy…

• Books like All Quiet on the Western Front by Erich Maria Remarque, The Guns of August by Barbara W. Tuchman, and A Farewell to Arms by Ernest Hemingway.