Well researched and enjoyably written, The Forest Lord series by author Steven A. McKay is a fast-paced and original re-casting of a familiar legend. McKay’s gift as a storyteller pulls the reader into a world of violence, passion, injustice and revenge and leaves us wanting more! Enjoy! 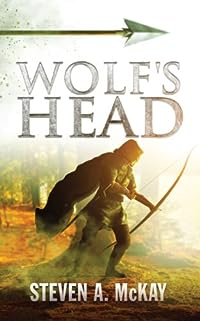 Wolf’s Head (The Forest Lord Book 1)
by Steven A. McKay

When a frightened young outlaw joins a gang of violent criminals their names – against a backdrop of death, dishonour, brotherhood, and love – will become legend.

After viciously assaulting a corrupt but powerful clergyman Robin Hood flees the only home he has ever known in Wakefield, Yorkshire. Becoming a member of a notorious band of outlaws, Hood and his new companions – including John Little and Will Scaflock – hide out in the great forests of Barnsdale, fighting for their very existence as the law hunts them down like animals.

When they are betrayed, and their harsh lives become even more unbearable, the band of friends seeks bloody vengeance.

Meanwhile, the country is in turmoil, as many of the powerful lords strive to undermine King Edward II’s rule until, inevitably, rebellion becomes a reality and the increasingly deadly yeoman outlaw from Wakefield finds his fate bound up with that of a Hospitaller Knight…

“Wolf’s Head” brings the brutality, injustice and intensity of life in medieval England vividly to life, and marks the beginning of a thrilling new historical fiction series in the style of Bernard Cornwell and Simon Scarrow. 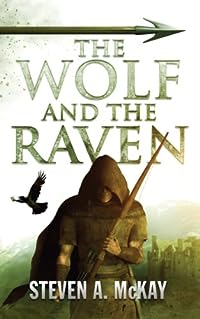 The Wolf and the Raven (The Forest Lord Book 2)
by Steven A. McKay

In the aftermath of a violent rebellion Robin Hood and his men must fight for survival with an enemy deadlier than any they’ve faced before…
1322. England is in disarray and Sir Guy of Gisbourne, the king’s own bounty hunter, stalks the greenwood, bringing bloody justice to the outlaws and rebels who hide there.
When things begin to go horribly wrong self-pity, grief and despair threaten to overwhelm the young wolf’s head who will need the support of his friends and family now more than ever. But Robin’s friends have troubles of their own and, this time, not all of them will escape with their lives… 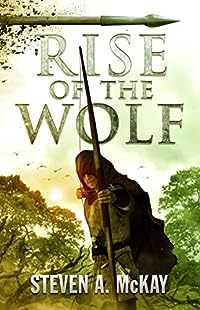 Rise of the Wolf (The Forest Lord Book 3)
by Steven A. McKay

Sir Guy of Gisbourne is back!

Bent on vengeance against Robin Hood and with a turncoat new lieutenant in tow, an unlikely new hero must stand up for herself…

The greenwood has been quiet and the outlaws have become complacent, but the harsh reality of life is about to hit the companions with brutal, deadly force thanks to their old foe, Prior John de Monte Martini.

From a meeting with King Edward II himself to the sheriff’s tournament with its glittering prize, the final, fatal, showdown fast approaches for the legendary Wolf’s Head.

New friends, shattered loyalties, and a hate-fuelled hunter that threatens to wipe out not only Robin’s companions but his entire family will all play their part in the RISE OF THE WOLF. 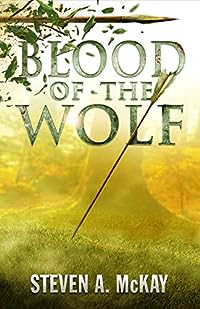 Blood of the Wolf (The Forest Lord Book 4)
by Steven A. McKay

After winning his freedom in Rise of the Wolf, Robin – with his faithful lieutenant John Little at his side – now spends his days travelling around northern England dispensing King Edward II’s justice.
When a new band of outlaws appears in Barnsdale, Sheriff Henry de Faucumberg sends Robin and John to deal with them. Before the lawmen can track them down though, Will Scaflock is attacked and another of their old companions murdered in his own home by the outlaws whose leader seems to have only one thing on his mind: Bloody vengeance!

Will Robin’s reunited gang be enough to defeat this savage new threat that seeks to wipe them out one by one? Or will another old foe provide the final twist that sees England’s greatest longbowman dead and buried?

This stunning conclusion to the bestselling Forest Lord series will delight and entertain readers looking for action packed historical fiction in the mould of Scarrow, Kane and Cornwell! 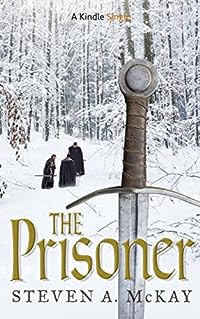 The Prisoner: A Forest Lord Novelette (Kindle Single)
by Steven A. McKay

When two lawmen – fabled former outlaws themselves – are sent to a snowy English village to arrest a rapist it seems a straightforward task, but is all as it first appears?

As Robin Hood and Little John take the criminal into custody they find the people of Stapleford accommodating enough, and the terrified victim’s bruises are plainly, painfully, visible. Inevitably, as they set off on the journey back to Nottingham the lawmen’s disgust at the captive’s crime colours their opinion of him and Little John has to be restrained from brutally assaulting the man.
The harsh conditions slow their progress though, and eventually the prisoner’s words and desperate, violent actions have the lawmen questioning what’s really been happening in Stapleford…
Can Robin and John complete the mission they’ve been given, or will their own innate sense of justice lead them down an unexpected path?

Fans of the bestselling Forest Lord series will love this exciting new stand-alone tale, set just before Blood of the Wolf, that explores the themes of morality and injustice in medieval England.