What happens when you cross Lord of the Rings with Dune? You get a rich, complex fantasy world full of political intrigue and magic, where realistic characters confront dangers and adversity, love and betrayal. The Shadow Wars series by David Pauly,  will not disappoint! Begin your epic journey today! 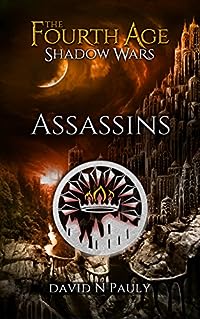 From the ashes of the Great War, Men, Elves and Dwarves struggle to rebuild their societies in the land of Nostraterra. Secret factions amongst all the races risk plunging Nostraterra into open warfare by threatening the life of Alfrahil crown prince of Men. As fire arrows plunge down, a desperate Alfrahil rides for his life to try and escape this deadly assassination. Who tries to kill the prince and why?

Assassins, is the first episode in the Shadow Wars series; a tale of present-day politics set within a fantasy world. The story continues in Conspiracy, when Elven and Dwarven connections to the plot to kill prince Alfrahil must be investigated. The series concludes with the third volume, Myths, where ancient legends come to life, impacting the lives of all who dwell in Nostraterra. 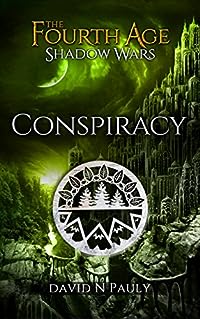 Bruno the Dwarf and Lithir the Elf are dispatched to investigate the Dwarven and Elven connections within the plot to kill Prince Alfrahil. Centuries of distrust between their races must be overcome if they are to be successful in their mission. Journey with an unlikely duo as they penetrate into the Dwarven mines of Nerea; where they are confronted by a maniacal religious sect. The Flame Priests’ lust for power threatens to consume all Dwarves with their racial hatred towards Elves and Men, and they vow to stop Bruno and Lithir at any price. Later, the North Forest Elves seem inviting at first, but Bruno and Lithir soon learn that it is an elaborate ruse and treachery soon stalks them at every turn. Desperate to learn the secrets of an ancient seer our duo travels deep into the wild forest where they face their most dire challenges yet.

How will they escape the traps set for them by their own peoples to bear their hard won secrets back to their lords? Conspiracy, the next episode in the Shadow Wars series, is filled with innovative magic and takes the reader on an epic journey into the realms of Dwarves and Elves, where Bruno and Lithir must rely on each other to survive if they have any hope of fulfilling their mission. 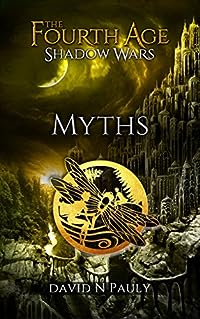 In their distant land of Platonia, the Gracies’ ancient protectors, the Bubblers are dying; soon to vanish from the rivers and leave Platonia open to invasion. Only the Gemwings, mythical giant insects can restore the magic within the Well of Life, allowing the Bubblers to thrive once more. Four Gracies volunteer to search for the Gemwings but as Platonia is attacked, will they find the Gemwings in time?

Prince Daerahil frets in exile, unable to vanquish a terrible presence that stalks him and his men. Closer and closer a dark shape is seen, hunting his soldiers in the shadows of Plaga Erebus–the land of wounded darkness. Ambushed alone, Daerahil fights for his life and his soul, and is given a choice by the Vagwar, a centuries old blood drinker. Aid the creature in his maniacal revenge upon those who imprisoned him in the dark land and receive his aid in taking the kingship in return. Refuse the offer and fight the Vagwar to the death, risking his life and those of his men. What choice will Daerahil make and how will his decision affect the rest of those in Nostraterra?

Myths is the final installment in the The Fourth Age: Shadow Wars series, where the stage is set for the dramatic play that will enfold in the next series, The Fourth Age: Dark Shaman. Dark Shaman builds upon the characters and themes of Shadow Wars, as it takes the reader farther into the wonders and horrors of the magical realms of Nostraterra.