Author Julie Smith writes like jazz should sound–cool, complex, and penetrating right to the heart. Don’t miss out on this great deal on books 4 and 5 in Edgar-winner Julie Smith’s series featuring funny, lively lawyer Rebecca Schwartz (plus a bonus short story) — at a very nice price! 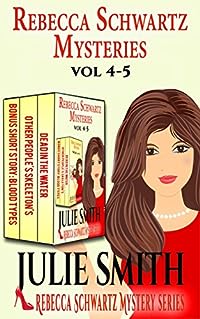 WHAT’S THE ETIQUETTE WHEN YOUR HOSTESS IS ARRESTED FOR MURDER?
San Francisco lawyer Rebecca Schwartz has occasion to wonder when she and her weekend hostess, Marty Whitehead, find a body floating in the 30-foot kelp tower at the Monterey Aquarium, and Marty’s promptly dragged off to the slammer.

Rebecca quickly grasps the Emily Post solution — sign on as Marty’s lawyer, try to keep her client’s two young kids out of the deep end, and somehow avoid drowning in the sea of lies gushing from Marty’s mouth–and everyone else’s. There’s a lot of intrigue among the aquarium’s oceangoing primates, as well as rumors of a pearl beyond price. Plus a new romance for our heroine!

WHAT SHE’S ABOUT TO LEARN WILL ROCK HER WORLD! Rebecca Schwartz, “Jewish feminist lawyer,” as she’s fond of saying, thought she knew her best friend–and her boy friend. Not to mention her family. But everything’s about to change.

Secrets spill out of these pages like hornets out of a nest, each with its own distinct sting, as author Smith weaves a thrill-packed and complicated San Francisco mystery that’s as much about how little we know about our nearest and dearest as it is about whodunit.

Rebecca’s shocked when Chris Nicholson, her glamorous law partner, is arrested for murder–but not nearly so shocked as when she discovers Chris can’t come up with an alibi. What she was doing, Chris says, involves a secret so damaging she’d be drummed out of San Francisco legal circles if anyone knew. Sure enough, when Rebecca uncovers it, her world tilts on its axis — and continues to list, ever more dangerously, as the story picks up speed and this formerly rational lawyer finds her worldview threatened by things she never knew existed. At least not in her circle! And Chris is far from the only one with a skeleton in her closet.

Author Alert: I wrote these after I’d written the first book in the Skip Langdon Police Procedural Series, which is a much darker proposition than the Rebecca Schwartz books. Usually. But some readers have remarked that these two are a good deal darker than the three previous titles in the series — edgier, more realistic, and… well, just not as funny. Guilty as charged. (Sorry! They just came out that way.) DEAD IN THE WATER has some scary scenes, and some readers have been offended by the way the characters wrestle with issues of religion and lack of same in OTHER PEOPLE’S SKELETONS. Whatever you decide, we’ve got your back: if you think you’ll like it and you guess wrong, we’ll refund your money and throw in a free book! Just write me at juleorleans@cox.net. –Julie Smith

This one’s absolutely shivery. If you’re a lawyer, and someone you haven’t heard from in years calls to ask how to execute a holographic will, what are you to think if he dies the next day? For all fans of Bay Area mysteries, with perhaps more appeal to readers of noir than cozies.